Forensic Risk Alliance has been keeping an especially close eye on the Nordic region in the year of the company’s 20th anniversary. The firm’s newest office opened in Stockholm in 2019.

Since it was founded two decades ago, FRA has been a top-choice for major law firms and companies to advise on high-profile corruption, sanctions and bribery matters, providing forensic accounting and e-discovery expertise. The firm has led prominent investigations since its early days, when it helped Holocaust victims and their heirs retrieve assets stolen by Nazis prior to and during the Second World War.

McLeod is a GIR Women in Investigations nominee and was the lead partner in FRA’s UN oil-for-food programme investigation into allegedly corrupt payments made under the programme. The final report, presented to six US congressional committees by McLeod, revealed evidence that companies and individuals paid kickbacks to Iraqi officials to participate in the programme.

Duthie is based in FRA’s London office from which he manages the company’s UK and European offices. He has developed expertise in Foreign Corrupt Practices act matters having worked on four of the 10 largest FCPA settlements and a handful of monitorships. In 2018 he was named Investigations Forensic Accountant of the Year by GIR’s sister publication, Who's Who Legal.

In FRA’s Providence office, Mason is credited with developing the company’s e-discovery tool, which allows companies to remotely process documents in compliance with data privacy, state secrecy and bank secrecy laws in multiple jurisdictions including the EU, China and Brazil.

In Washington, DC Stacy Fresch is head of operations and has been appointed as an independent co-monitor in connection with a Public Company Accounting Oversight Board enforcement action. Fresch was formerly assistant chief accountant at the US Securities and Exchange Commission and joined from KPMG in 2016.

Jen Baskin, a GIR Women in Investigations nominee, was the first forensic accountant assigned to the SEC’s FCPA unit in 2011, and in 2014 she was an in-house forensic accounting specialist and compliance officer at IBM. She joined the firm in 2017 from EY.

Additions to the firm in 2018 included Trevor Wiles, Drew Costello and Jenna Voss. Wiles joined FRA as a partner in the firm’s forensic services practice in June after two decades at KPMG, and Voss joined as a director in New York after three years at AlixPartners.

Former IBM in-house counsel Doel Kar joined FRA at the beginning of 2019. A practicing lawyer with 18 years’ experience, Doel was responsible for IBM’s global anti-corruption compliance program across its supply chain and is now a director at FRA’s New York office.

In February 2019, Swedbank chose to hire FRA for a forensic investigation of claims made by Swedish journalists that the bank had facilitated money laundering. At the time, the bank said it wanted to present the results at the next annual general meeting in late March, giving FRA less than a month to complete the initial investigation.

FRA was instructed by Rolls-Royce in 2017 to analyse financial material and prepare submissions on gross profit figures for the SFO’s fraud investigation into the engineering company. Rolls-Royce paid £671 million to the DOJ and the SFO as part of a deferred prosecution agreement to settle allegations that it bribed agents to win export contracts.

FRA was instructed by law firms to provide e-discovery and forensic accounting services in the corruption investigation into Swedish telecommunications company Telia. The investigation led to a first-of-its-kind settlement in 2017 with US, Dutch and Swedish authorities to resolve allegations of bribery in Uzbekistan. FRA assisted in the disgorgement negotiations.

FRA has acted for French construction company Alstom and chemicals company Innospec. FRA was also hired by French engineering company Technip in 2008, in a DOJ investigation for alleged bribery relating to the construction of liquefied natural gas facilities in Nigeria, which was resolved with a $240 million penalty in 2010.

In 2016, FRA was retained to support the independent monitor overseeing a settlement between the Justice Department and the Ferguson City Council after the DOJ uncovered a pattern of unlawful conduct by the city’s law enforcement which disproportionately affected African Americans.

According to the firm’s website, FRA acted as the forensic accounting support to the monitor for Israel-based Leumi after the bank was caught up in a tax avoidance scheme.

FRA was hired by Miller & Chevalier to support an independent examiner of several Swiss banks under the DOJ’s 2013 tax programme.

FRA won the GIR Award for Investigations Consultancy of the Year in 2016 and 2017.

Forensic Risk Alliance (FRA) is an international consultancy which works with global corporations and their counsel to identify, analyse and mitigate the risks associated with transactional compliance obligations, litigation and investigations. We are regularly hired by law firms and corporations to provide expertise on some of the world’s largest compliance matters and are consistently recommended for our ability to go the extra mile during high-stake investigations. 2019 marked our 20th anniversary as a firm – a major milestone in our story of success and growth.

Unlike traditional accounting firms, we operate purely in the forensic space and generally have no conflicts. As internationally recognised specialists in multi-jurisdictional investigations, we bring a high level of confidence to clients by providing clear, robust and candid advice that is trusted by clients, regulators, courts and enforcement agencies. We frequently work at the direction of counsel on global matters including complex multi-year investigations, collecting data from numerous accounting and electronic sources, analysing complex transactions and advising clients in response to regulatory inquiries and monitorships.

We build strong client relationships, acting as partner, trusted advisor and thought leader. Many clients have relied on FRA for more than two decades to deliver client service excellence, subject matter expertise and global market knowledge. We have extensive cross-sector and cross-border experience and scalability anywhere in the world.

We take pride in FRA’s inclusive and diverse teams operating in our ‘one firm’ collaborative culture across disciplines and geographies. Our globally integrated teams have worked in more than 75 countries – both developed economies and emerging markets.

Complex data analytics, information technology and data management are at the core of our foundation. Our data analytics team seamlessly integrates with our forensic accounting, digital forensics and eDiscovery teams to offer creative analytical and visualisation solutions tailored to client needs. 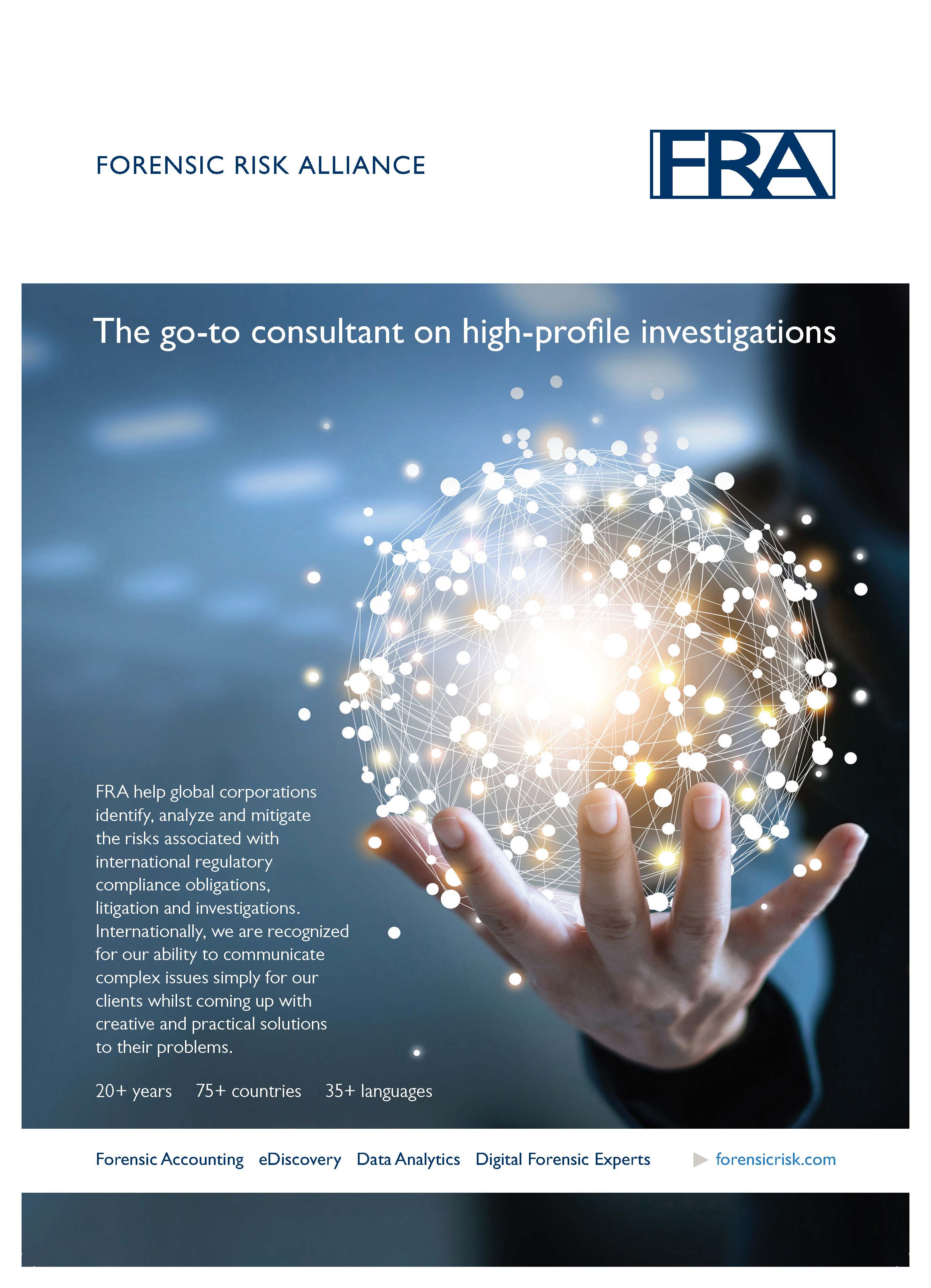