If a corporate scandal erupts in Singapore, WongPartnership is one of the first firms a company would turn to – whether the case concerns bribery, fraud or a data breach.

WongPartnership is a full-service firm that opened in Singapore in the early 1990s and has been busy building footholds across Asia and the Middle East ever since. WongPartnership’s white-collar and investigations practice, based in Singapore, handles a myriad of well-publicised matters across the globe.

The firm has been engaged by multinational companies and international financial institutions to provide advice in cases connected to foreign exchange manipulation, bribery and corruption, fraud, tax and antitrust allegations, under investigation by a multitude of authorities around the world.

Ho is deputy head of the specialist and private client disputes practice and has particular experience in the medical and life sciences industries, while Lam heads the IP, technology and media, telecommunications and data protection practices.

Behind them sits a team of lawyers with plenty of government experience. Senior counsel Chee Meng Tan was deputy senior state counsel in the Attorney General’s Chambers; partner Jenny Tsin was a deputy public prosecutor for the same office; and partner Simran Toor spent five years as a prosecutor in Singapore.

WongPartnership has been instructed to advise companies on various corruption investigations, including a foreign oil and gas company on a probe involving Singapore and Indonesian authorities.

The firm acted for Singapore’s Ministry of Health and MOH Holdings, the holding company of the country’s public healthcare bodies, at an inquiry committee hearing over a cyberattack into patient databases of SingHealth, a grouping of Singaporean healthcare institutions. The attack resulted in the theft of personal information belonging to 1.5 million patients, including the Prime Minister Lee Hsien Loong. Reports state that SingHealth and Integrated Health Information Systems were fined S$1 million (US$725,000) for the shortcomings they made which led to the breach.

WongPartnership is working on an ongoing investigation for Wong Chee Meng, the former general manager of Ang Mo Kio town council, who has been charged with accepting $107,000 in bribes from engineering companies 19-ANC and 19-NS2 in exchange for town construction contracts. The Corrupt Practices Investigations Bureau (CPIB) launched its investigation into the matter in March 2018.

GIR reported in February 2018 that WongPartnership represented executives of Singapore-based oil rig builder Keppel Offshore. Several Keppel executives were arrested following the company’s US$422 million trilateral settlement with the US, Singapore and Brazil to resolve allegations that it bribed Brazilian government officials.

When WongPartnership opened in Shanghai in 2004, it became one of the first Singaporean law firms to open offices abroad. This move was followed by offices in Doha, Abu Dhabi and Beijing. In 2014, the firm opened an office in Myanmar.

The firm has also partnered with other leading South East Asian practices – further broadening its investigations scope. WongPartnership has an alliance with Indonesia’s Makes & Partners, Zambrano Gruba Caganda & Advincula in the Philippines, as well as leading Malaysian firm Foong & Partners. In 2016, the firm formed a similar alliance with Al Aidarous in Dubai.

Few of the clients that the firm represents in investigations can be mentioned for confidentiality reasons.

WongPartnership has acted on some of the largest cases in Singapore over the years. The firm advised the former director of Singapore’s Central Narcotics Bureau, who was charged in 2012 with approving IT contracts involving Hitachi Data Systems in return for oral sex from an employee of the company. Senior counsel Tan Chee Meng managed to secure a full acquittal for his client in 2013, after the prosecution’s key witness was shown to be unreliable.

WongPartnership counselled Nachi-Fujikoshi Corporation during a Competition Commission of Singapore (CCS) probe into the ball bearing industry, which was the agency’s first ever multi-jurisdictional cartel investigation. In May 2014, the CCS fined the Japanese company S$7.56 million, which was the largest fine the CCS had ever levied. Nachi appealed the decision, and the penalty was reduced after the Competition Appeal Board found that CCS had incorrectly calculated the fine.

GIR previously reported that the firm was instructed in certain aspects linked to MAS actions against a number of banks over anti-money laundering lapses in relation to the investigation into money embezzled from Malaysia’s state development fund, 1MDB.

The firm also advised Serina Wee Gek Yin, the former finance manager of Singaporean Pentecostal mega-church City Harvest Church, who received five years’ jail in May 2017 for her alleged involvement in a scheme to misappropriate US$36 million to fund the music career of the church pastor’s wife.

WongPartnership is a market leader in Singapore, known for the provision of high-quality legal services that extend beyond the shores of Singapore with a particular focus on the Asia-Pacific region. We offer clients access to lawyers in our offices in Singapore, Beijing, Shanghai and Yangon, and also through our member firms, as part of WPG, a regional law network that brings together prominent law firms in Abu Dhabi, Dubai, Jakarta, Kuala Lumpur and Manila.

The firm has a full-service compliance, investigations and enforcement practice across all major industry sectors in Singapore, with a focus on financial services, transport, trade regulation, healthcare, safety and the environment. Our teams provide compliance advice, regulatory due diligence and strategic advice on the impact of governmental regulations on businesses and corporate conduct. We are also actively involved in domestic and cross-border government-led and internal investigations into civil, criminal and regulatory misconduct, and represent corporate and individual defendants in enforcement actions, from fraud to market misconduct and insider trading, to corruption and white-collar crime. In the antitrust sector, the team has been involved in all major multi-jurisdictional cartel infringement decisions by the Competition and Consumer Commission of Singapore. We have acted in numerous investigations involving cartel activity and abuse of dominance and represent clients in internal investigations, responding to subpoenas, handling proceedings and search warrants, assisting in dawn raids and other investigations. We also provide customised and effective compliance training programmes.

In the corporate and financial services area, the team is active in the full range of regulatory investigations with regulators such as the Singapore Exchange, the Commercial Affairs Department, the Corrupt Practices Investigations Bureau and the Monetary Authority of Singapore. We have also advised regulators and professional bodies including the Monetary Authority of Singapore, the Singapore Exchange, the Association of Banks in Singapore, the Singapore Medical Council, the Singapore Dental Council, the Singapore Sports Council and the Energy Market Authority. Recent enforcement matters into anti-corruption, market-rigging, insider trading and fraud have also involved regulators from other markets and jurisdictions, including Japan, France, the BVI, the Netherlands, the UK and the US. In the cyber investigations area, the team has vast experience in handling matters involving cybersecurity, technology, data protection and privacy laws, including the Personal Data Protection Act (PDPA), government regulations, regulatory, transactional and litigation matters, data protection compliance programmes, IT agreements, data breach incidents and law enforcement. We advise a wide range of clients varying from financial institutions and multinationals, to large local listed companies in addressing cyberattacks and post-incident responses.

One of the greatest strengths of the team is the ability to draw on the subject-matter expertise and experience of the firm's other practices, including competition and regulatory; commercial and corporate disputes; corporate governance and compliance; employment; financial services regulatory; intellectual property; media and technology; specialist and private client disputes; and tax. This cross-practice, multidisciplinary model is the firm's distinctive trademark and has been well received by clients and regulators alike. The firm has been consistently recognised as one of the top 100 firms in the world for corporate investigations by Global Investigations Review’s GIR 100 since its inaugural edition. In 2015, we were the first and only ASEAN firm to be ranked in the worldwide investigations league table, reflecting the market-leading position of our practice. We have been involved in most of the major investigations in Singapore over the past 12 months. Additionally, our other practice groups whom we work closely with for investigation work have also been highly recognised by various international publications. 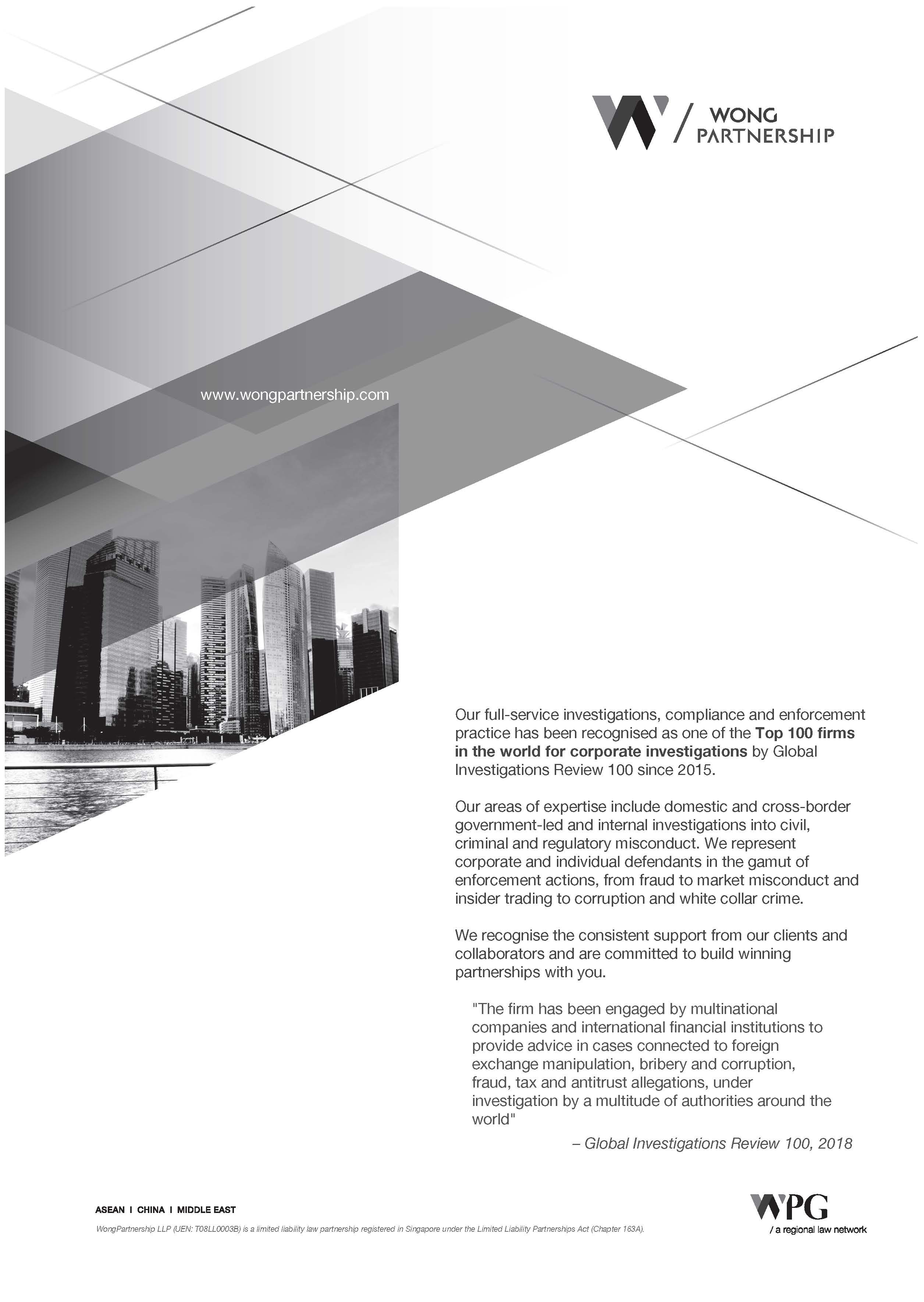