Hunton Andrews Kurth notably oversaw an investigation into the 2017 Charlottesville protests and is currently representing Yahoo! over lawsuits arising from the largest data breach in history.

In April 2018 Hunton & Williams and Andrews Kurth Kenyon completed a merger to form Hunton Andrews Kurth. The firms had a lot in common. Both had a history dating back over 100 years and both served different sections of the energy market. The newly merged firm serves clients across the US, Asia, Europe and the Middle East.

The firm’s white-collar and investigations team is composed of former high-ranking officials from the US Department of Justice (DOJ), including a former counsel to the deputy attorney general, a former deputy assistant attorney general and chief of staff of the antitrust division, a former senior counsellor to the FBI director, and a number of former assistant US attorneys.

Laura Colombell Marshall, a GIR Women in Investigations nominee in 2015 and previously a federal prosecutor for 15 years, is chair of the firm’s white-collar and investigations practice. She succeeded Tim Heaphy, who left the firm in September 2018 to become general counsel at the University of Virginia.

John Delionado, who has been at the firm since 2004, was appointed by a federal court in the Southern District of Florida as special master to ensure that Takata and several carmakers are complying with judicial orders that addressed a fatal airbag defect. Delionado is a former assistant US attorney in Miami. He has prosecuted crimes including bank and wire fraud, narcotics trafficking and money laundering.

For a year, the firm monitored a medical device manufacturer to make sure it was complying with a deferred prosecution agreement. The US Attorney’s Office for the District of New Jersey selected the firm for the role which also involved evaluating the company’s policies regarding selecting, engaging, and paying consultants.

The firm opened a new Boston office in 2018, which includes special counsel Thomas Reilly. Reilly was the Massachusetts attorney general for two terms.

In 2017, the firm worked on behalf of the city of Charlottesville, Virginia, following a highly publicised protest in the city during which three people died and many more were injured. The firm carried out an independent review of the event and the city’s response. The review, which was completed in 90 days, involved more than 150 interviews and the review of more than 500,000 documents. The firm produced a 226-page report cataloguing the facts of the protest events, noting successes and failures in preparation and event management, and making recommendations to guide the city’s response to future mass demonstrations.

The firm has represented an individual involved in the Fifa corruption scandal. It has also assisted clients with Foreign Corrupt Practices Act (FCPA) investigations involving operations across the globe. For example, the firm represented a global logistics company in an internal investigation into whistleblower allegations of bribery at a client’s subsidiary.

Hunton Andrews Kurth represented several witnesses in the special counsel’s investigation into possible links or coordination between the Russian government and individuals in the 2016 presidential campaign of Donald Trump.

The firm has been representing Yahoo! in a series of consumer class actions over what has been called the largest data breach in history. The firm is lead counsel to Yahoo! across several districts in both state and federal courts. The 2013 and 2014 breaches affected as many as 3 billion accounts globally.

The investigations team has worked around the world in the US, Europe, the Middle East, Asia, Africa and Latin America.

The firm’s international work is conducted out of key offices in Washington DC, Richmond, London, Brussels, Beijing and Bangkok. The firm’s Latin American practice is based in Miami.

It often collaborates with accounting and investigations firms such as Alvarez Marsal and PricewaterhouseCoopers.

The firm was unable to give on-the-record details for many of its clients, but GIR can report that it has undertaken investigations on behalf of large manufacturers, pharmaceutical companies and energy businesses.

The firm represented a biopharmaceutical company in an FCPA internal investigation regarding foreign research grants; acted for banks, directors and officers in DOJ probes into violations of the Bank Secrecy Act; and advised companies on anti-money laundering issues.

For example, the firm advised a multinational beverage company on its global anti-money laundering compliance programme.

The firm represented a major multinational company in a civil Racketeer Influenced and Corrupt Organizations Act action brought by the Republic of Colombia against several members of the alcoholic beverage industry. Colombia sought hundreds of millions of dollars of damages based on claims of money laundering and tax avoidance arising from the alleged illegal importation and distribution of products in Colombia.

Hunton Andrews Kurth partner Edward Fuhr was also the chief adviser for tobacco wholesale distributor Alliance One on its 2010 FCPA resolution worth US$19.5 million with US authorities.

With 1,000 lawyers in the United States, Asia, Europe and the Middle East, Hunton Andrews Kurth LLP serves clients across a broad range of complex transactional, litigation and regulatory matters. We are known for our strength in the energy, financial services, real estate, and retail and consumer products industries, as well as our considerable experience in more than 100 distinct areas of practice, including privacy and cybersecurity, intellectual property, environment, and mergers and acquisitions. Our full-service litigation practice is one of the largest in the country. Visit HuntonAK.com and follow us on Twitter, LinkedIn and YouTube.

Hunton Andrews Kurth LLP’s white collar defense and internal investigations team has considerable experience in corporate criminal defense and government enforcement litigation. Prosecution of a company or its officers and employees can turn into “bet the company” litigation. The risks are not limited to fines and jail time; they also can include civil enforcement proceedings, and government investigations frequently result in third-party litigation, creating significant financial exposure. Our lawyers regularly represent clients in grand jury investigations and defend businesses and individuals in white collar criminal investigations and prosecutions in the United States and abroad, in parallel civil enforcement proceedings and in related third-party proceedings.

Our numerous investigations have included reviews of internal financial controls and procedures; allegations of corrupt dealings, domestic and abroad; financial reconciliations; forensic data recovery; employee and vendor interviews; trade secret; corporate espionage issues; and Foreign Corrupt Practices Act reviews. In connection with these investigations, we routinely advise clients on the formulation of compliance programs that strengthen internal controls and provide critical protection if a corporation is subject to a criminal investigation. 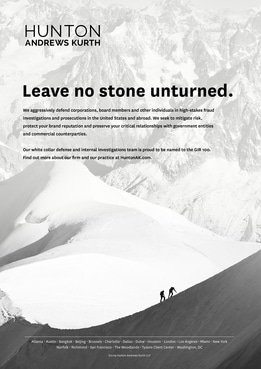