Founders Luciano Feldens and Antenor Madruga, who both have a background working in government, in 2013 joined forces to launch white-collar boutique FeldensMadruga. The pair’s shared interests have produced a firm that specialises in white-collar crime, related litigation and compliance and asset recovery work.

Madruga is listed in both Who’s Who Legal: Investigations and Who’s Who Legal: Business Crime Defence. He leads the firm’s Brasília office and the firm’s corporate compliance practice and, alongside Feldens, the firm’s white-collar crime practice. Madruga previously held several positions in Brazil’s federal government, such as national secretary of justice, director of asset recovery, member of the board of the Brazilian Financial Unit, and coordinator of the National Strategy for Combating Corruption and Money Laundering.

The firm’s other founder, Feldens, is based in Porto Alegre. He served as a federal prosecutor for over a decade, specialising in financial crimes and money laundering cases. In private practice, he has represented clients in some of the major financial crime cases in Brazil.

Débora Poeta, the third partner of the firm, also based in Porto Alegre, is a white-collar crime and antitrust lawyer. Ana Belotto, a licensed New York lawyer, is a foreign law consultant in the firm’s compliance and investigations practice and acts on multi-jurisdictional cases with a US nexus, focusing on Foreign Corrupt Practices Act violations.

Claudia Chagas joined the firm as a consultant after leaving her role as a federal prosecutor in 2017. She served as the national secretary of justice for over four years and led the team that created the Brazilian Department for Asset Recovery and International Legal Cooperation.

Over the last year, FeldensMadruga has continued to be active in the Operation Car Wash investigation. It is also expanding past its usual client repertoire from the construction and energy sectors to include international clients in the health, chemical and financial sectors.

The firm has assisted Norwegian law firm Selmer in conducting an internal investigation into Norwegian oil services company Sevan Marine. In April 2018, GIR reported that Sevan faced allegations that it had paid bribes to Brazil’s state-controlled oil company, Petrobras, to win contracts. The results of the internal investigation were passed on to Norway’s National Authority for Investigation and Prosecution of Economic and Environmental Crime, and to the Federal Prosecution Service in Brazil.

The firm is currently defending HStern, one of the largest jewellers in Brazil, in a Council for Financial Activities Control (COAF) investigation into money laundering. The firm has also represented HStern’s executives in a plea bargain agreement over the conduct.

Engineering company Rolls-Royce continues to seek FeldensMadruga’s advice. In 2017, acting with Debevoise & Plimpton and Slaughter and May, the firm participated in the Brazilian part of the negotiation of parallel settlements between Rolls-Royce and Brazil’s Federal Prosecution Service, the US Department of Justice and the UK’s Serious Fraud Office. The British engine manufacturer had been accused of bribery to win contracts in multiple countries around the world. As part of the leniency agreement between Rolls-Royce and Brazil’s MPF, the company had to pay Brazilian authorities $26 million, according to GIR’s reporting in January 2017. GIR has also previously reported that FeldensMadruga acts for Rolls-Royce in ongoing discussions with the country’s Ministry of Transparency and General Comptroller’s Office. The results of the investigation have been delayed four times, with the newest deadline set for February 2020.

The firm has four offices in Brazil: Brasília, Porto Alegre, São Paulo and Rio de Janeiro. Over the last year, partners from the firm have worked across Brazil, as well as overseas in the UK, US, Switzerland and Spain.

Some of the big-name clients the firm works for include Rolls-Royce, social media company Facebook, accommodation company Airbnb and American conglomerate General Electric. In the past, the firm has worked for banks UBS and HSBC Brazil, Latin American fund GP Investments and French manufacturing company Vallourec.

FeldensMadruga was among the firms that negotiated a non-prosecution settlement between Brazilian construction company Carioca Engenharia and Brazil’s Federal Prosecution Service (MPF). As a result, the company was allowed to continue to obtain government contracts. The civil and criminal settlements signed with the public prosecutors and comptroller general were among the first of those reached during Operation Car Wash. The firm worked with Barbosa Müssnich & Aragão during the process.

Feldens has represented one of the biggest individual clients in Brazil: businessman Marcelo Odebrecht, who ran an enormous construction company and was accused by prosecutors of having paid bribes in exchange for contracts. In March 2016 he was sentenced to 19 years in prison for corruption, money laundering and conspiracy. But in December 2016 he struck a plea deal with federal prosecutors, allowing him to be released. He was freed from prison in December 2017 and will serve the rest of his sentence from home.

In 2016, construction and engineering company Odebrecht confessed to corruption and paid $2.6 billion in fines in settlement with US, Swiss and Brazilian authorities. Prosecutor Deltan Dallagnol described the scandal as “worse than Watergate.”

FeldensMadruga is a Brazilian firm specialising in white collar-crime. The firm’s work goes beyond the traditional scope of criminal litigation, defending the needs and interests of clients in all circumstances facing potential sanctions from the state. This results in a strategic approach to criminal, administrative and civil disputes. The firm also advises on preventive anti-money laundering and anti-corruption, designing effective compliance programmes.

The firm’s name partners, Antenor Madruga and Luciano Feldens, both come from a law enforcement background.

In the late 1990s, while still serving as federal attorney, and prior to joining private practice, Antenor Madruga played a pivotal role in promoting changes in anti-money laundering law enforcement and policy in Brazil. He coordinated and executed the Brazilian strategy in a cross-border litigation that ended with the conviction of former judge Nicolau dos Santos Neto – a groundbreaking case, not only for white-collar crime prosecution but also for cross-border litigation and international legal cooperation.

Madruga has a PhD from the University of São Paulo and a specialist degree in business law from the Catholic University of São Paulo. He is regarded by specialists as a visionary pioneer in the field of international legal cooperation. He led the team that founded the department of asset recovery and international legal cooperation at the Ministry of Justice, and initiated the National Strategy for Combating Corruption and Money Laundering (ENCCLA).

Luciano Feldens was a federal prosecutor from 1997 to 2009. During that time, he led several emblematic white-collar crime and money-laundering cases before federal courts. After joining private practice, he worked as defence attorney in some of the most famous criminal cases in recent Brazilian history, such as that of banker Daniel Dantas in the well-known Operation Satiagraha; and that of marketing executive Duda Mendonça, who ran President Lula’s political campaign in 2002. He has a PhD from the University of Valladolid in Spain and has long served as a law professor at the Catholic University of Rio Grande do Sul.

The combination of backgrounds and expertise from the firm’s name partners – a mix of cross-border litigation, international legal cooperation, criminal expertise and academic tradition – earned FeldensMadruga a prominent position in the Brazilian legal environment from its very beginnings in 2013. The firm has acted in important cases originating from Operation Car Wash, such as the defence of Marcelo Odebrecht, and negotiated plea bargain and leniency agreements for important global firms like Rolls-Royce. In this case there was coordination with foreign law firms and authorities to close the final deals.

With offices in Brasilia, Porto Alegre, São Paulo and Rio de Janeiro, FeldensMadruga is present in 60 jurisdictions through its alliances worlwide.

White-collar crime: We are specialised in complex representation of corporate clients, working strategically to anticipate and respond to risks regarding the Brazilian legal environment for business in matters of white-collar crime.

Administrative proceedings: The complex Brazilian regulatory environment, especially in banking and financing, can result in serious collateral administrative sanctions related to criminal prosecutions. We provide a one-front strategy that considers the global interests of our clients.

Litigation (higher courts): The nature of the Brazilian legal system allows many different proceedings to reach the superior courts such as the Superior Court of Justice (STJ) and the Supreme Federal Court (STF). Our office in Brasilia has litigation experts with experience in acting before our higher courts. 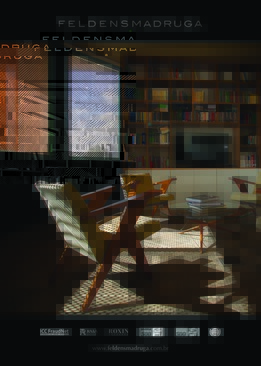