Diaz Reus & Targ, a Miami-based firm with strong roots in Latin America, has developed a focus on advising prominent companies and individuals in corruption, money laundering and sanctions matters.

Diaz Reus has grown from a single office in Miami to a global firm with 23 offices across the Americas, Asia, the Middle East and Europe. Clients in Latin America in particular have gravitated towards the firm.

The investigations practice is predominantly housed in the firm’s Miami office, and is led by founding partners Michael Diaz and Robert Targ.

Diaz is an investigator and litigator with over 30 years of experience advising clients on compliance, fraud, money laundering and asset recovery matters. Prior to becoming a prominent private practice lawyer, Diaz worked as an assistant state attorney in Miami-Dade County between 1986 and 1990, serving under Janet Reno, who later became the first female US attorney general.

Like Diaz, Targ is a skilled hand at advising clients on anti-money laundering, fraud and white-collar matters, and also has prior government experience to boot. He is a former assistant US attorney in the Southern District of Florida, where he was in charge of handling civil fraud and civil forfeiture cases.

Also in Miami is partner Marta Colomar-Garcia. Colomar-Garcia specialises in acting for individuals and multinationals in Foreign Corrupt Practices Act (FCPA) and RICO matters, as well as enforcement actions by the US Treasury’s Office of Foreign Assets Control.

In Washington, DC, the firm has partner Richard Wiedis, a former senior litigator for the criminal divison’s fraud section at the US Department of Justice (DOJ) , where he worked for 15 years. He specialises in white-collar criminal defence, FCPA matters, civil forfeiture cases and compliance.

Patricia Diaz, a former division counsel at the Drug Enforcement Administration in Miami, left the firm to become of counsel at Fee Yates & Fee in December 2018.  Diaz was an assistant US attorney in the Southern District of Florida where she predominantly prosecuted money laundering cases.

The firm represented former Venezuelan diplomat Hugo Carvajal, who was arrested in 2014 over US drug-trafficking charges but was later released after it was found the arrest breached his diplomatic immunity. Carvajal was arrested in Spain in April 2019 on behalf of the DOJ, which has requested his extradition on the drug charges. A Spanish court rejected his extradition in September 2019.

Diaz Reus is also representing Fabio Tordin, the former CEO of media sports company Traffic Sports USA, in the cross-border Fifa corruption investigation. In November 2015, Tordin pleaded guilty to wire fraud conspiracy and tax evasion, and agreed to forfeit more than US$600,000. He has not yet been sentenced.

The firm advised John Freddy Cuellar Silva after he was placed on OFAC’s specially designated nationals list for his alleged connections to narcotics trafficking and Mexican drug kingpin Joaquín Guzmán, known as El Chapo. The list bars individuals from engaging in US transactions. The firm successfully resolved the matter when he was removed from the OFAC list in 2017.

The firm has offices across the US and abroad with a particular concentration in Latin America, including Buenos Aires, Lima, Mexico City, Panama, Santiago, Santo Domingo and São Paulo. In Asia, Diaz Reus has set up shop in Dubai and Shanghai, while in Europe it has offices in Frankfurt and Madrid.

In the past few years, the firm’s lawyers have covered Latin America carrying out investigations in Mexico, Colombia, Venezuela, Panama, Honduras and the Dominican Republic.

The firm will soon be expanding to its sixth continent with plans to open offices in South Africa.

Diaz Reus’ clients come in all manner of shapes and sizes, ranging from state entities, such as the Central Bank of Venezuela, to businessmen and major banks. The firm has advised Pemex, Mexico’s state-owned oil company, and Shanghai Pudong Import & Export, a Chinese trading business.

The firm has played a part managing the fallout from a number of the major scandals to rock the world of finance in recent years. Michael Diaz was co-lead counsel for a group of disgruntled bondholders seeking money from Argentina after the country missed a series of bond payments. In 2010, the firm helped the bondholders secure a US federal court freezing order for US$2.4 billion of Argentinian assets held in the US. Diaz Reus lawyers were also instructed to help victims recoup assets in the wake of two notorious multi-billion-dollar fraud schemes led separately by Bernard Madoff and Allen Stanford.

The firm successfully represented the owner of a Colombia-based gold company over money laundering charges that were tied to alleged drug trafficking and terrorist financing violations. The firm conducted an internal investigation that was turned over to US and Latin American authorities. The authorities declined to prosecute the company and its owner.

Diaz, Reus & Targ LLP is a Miami-based full-service international law firm and alliance with board-certified lawyers in international litigation and arbitration, international law, and immigration and nationality law as well as certified anti-money laundering specialists. It boasts a diverse and wide range of experience in the legal, regulatory, policy, enforcement and commercial landscapes.

The firm has successfully continued building its niche in handling the most sensitive and delicate cases and investigations in Latin America – Venezuela, Honduras, Guatemala, Nicaragua, Mexico, El Salvador – with alleged ties to Iran, Hamas, Hezbollah, Russia, China and other relationships currently considered national security risks to the US. The US will continue to roll out legislation such as the Magnitsky Act, Presidential Executive Orders, OFAC and FINCEN sanctions to stem the flow of these national security risks. Our law firm continues to expand its expertise in these areas while successfully resolving those delicate and sensitive investigations on behalf of its US and Latin American based clients. 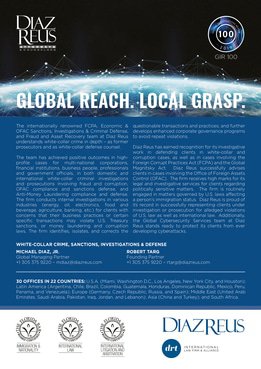