Adding to its already robust team, BakerHostetler has made three white-collar hires this year in New York, Los Angeles and Washington, DC.

The firm opened its office in New York in 2001, and has since been appointed to a series of corporate monitorships, with three of the firm's partners being picked for the coveted positions.

New York partner and former Brooklyn federal prosecutor George Stamboulidis has been selected as an independent monitor on six separate occasions. These include an 18-month monitorship of Merrill Lynch, handed to Stamboulidis in 2003 after the company avoided criminal charges over its role in the Enron debacle. He is a Who’s Who Legal: Business Crime Defence nominee.

Stamboulidis also led a monitorship for Mellon Bank (now Bank of New York Mellon), where he oversaw Mellon's compliance with the conditions of an August 2006 settlement agreement with the US Attorney's Office for the Western District of Pennsylvania. The settlement resolved allegations of criminal conduct by Mellon employees regarding the destruction of over 77,000 tax returns and payments.

Carney, a former prosecutor who also spent five years at the US Securities and Exchange Commission (SEC), was in 2018 appointed as a special examiner by the United States Bankruptcy Court for the Southern District of New York to conduct a special investigation of the circumstances surrounding the allegations that celebrity jeweller Nirav Modi defrauded India's state-run Punjab National Bank out of US$2 billion.

In Washington, DC, Jonathan Barr is among the names to know. He previously served for more than 15 years in government, both at the SEC and as a prosecutor.

Other partners at the firm with significant US government experience include Jonathan New, who spent seven years at the Manhattan federal prosecutor's office where he was a member of a strike force investigating mortgage fraud and financial schemes following the 2008 financial crisis.

Carole Rendon, a former US attorney for the Northern District of Ohio, is based in the Cleveland office and has a strong reputation for handling cybersecurity problems. GIR has reported that Rendon recently represented a former energy sales employee at Rolls-Royce in connection with a scheme to bribe officials in Central Asia and China.

Other important partners include Steven Dettelbach in Cleveland, as well as Jimmy Fokas, David Friebus and David B Rivkin.

The firm made three white-collar hires in 2019: Joseph Sacca in New York, Teresa Goody in Washington, DC and Kim Morris in Los Angeles.

BakerHostetler is representing Chris Collins, a Republican congressman from New York. In 2018, Collins was accused by the US attorney’s office in Manhattan of participating in an alleged insider trading scheme. In August, prosecutors narrowed the criminal charges against Collins, who maintains that he is innocent. The trial is scheduled for February 2020.

In 2018, John Carney was appointed as special examiner by the United States Bankruptcy Court on an investigation into allegations of a US$2-billion fraud involving Indian businessman Nirav Modi and employees of the Punjab National Bank in India. In his report, Carney found evidence that Modi's now-bankrupt company, Firestar Diamond, and other businesses deceived the bank on a massive scale.

In 2017, New York's Stamboulidis was appointed monitor for the International Union of Operating Engineers. Stamboulidis is, for a five-year period, responsible for monitoring the labour union's efforts to eradicate corruption. Lauren Resnick has served as his lead counsel in the matter.

Among its network around the globe, BakerHostetler has strong connections with US firm Tucker Ellis, offshore law firm Bedell Cristin and French firm Wenner.

BakerHostetler has represented Irving Picard, a trustee for the liquidation of Bernard Madoff Investment Securities. The firm has also acted for the St Nicholas Greek Orthodox Church on an internal financial forensic investigation.

The firm recently picked up Endo Pharmaceuticals as a client.

The firm was retained by former city trader and JPMorgan Chase managing director Bruno Iksil, also known as the "London Whale", who was under investigation for losses at JPMorgan through credit default swaps in 2012. BakerHostetler helped clear him of criminal, civil and regulatory charges.

The firm also undertook an internal financial forensic investigation to ensure there were no improper payments made during the reconstruction of the Saint Nicholas Greek Orthodox Church and National Shrine at the World Trade Center. The original Saint Nicholas Church was destroyed during the 9/11 terrorist attacks. Because it is located at the WTC site, the church is one of the most complex and expensive church construction projects of its kind. The investigation found that no improper payments were made.

BakerHostetler’s white collar, investigations and securities enforcement and litigation team is among the nation’s leaders in all aspects of corporate criminal defence and enforcement-related litigation. Our team includes some of the country’s most experienced and seasoned lawyers who are dedicated to protecting businesses and individuals by preventing violations before they occur. We see beyond the horizon to help clients minimise the legal, economic and reputational risks that corporate investigations and enforcement actions pose by working to quickly identify, contain and correct potential misconduct.

Our more than two dozen team members, many of whom have served as former federal and state prosecutors and SEC enforcement attorneys, have served as legal advisers to Fortune 50 companies and major hedge funds, as well as former advocates for the government. This deep bench of talent allows us to better advise our clients on corporate criminal laws and legal regulatory standards. 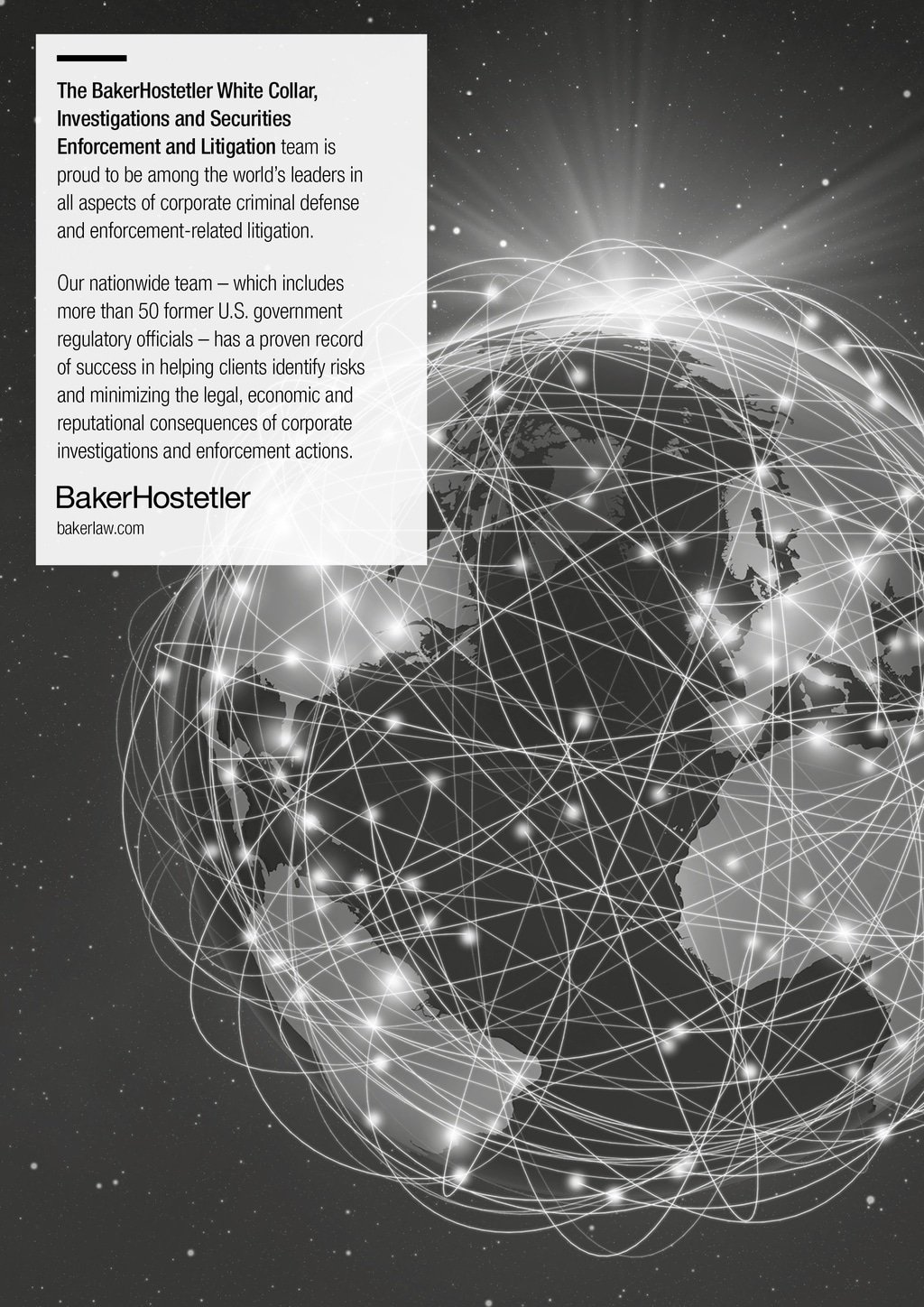