Koury Lopes Advogados was among the first Brazilian firms to develop an investigations practice. That helps explain why US law firms now frequently work with KLA on major cases.

KLA began working in the investigations space 10 years ago, when few Brazilian firms were active in the field. Its team currently comprises four partners, six associates and three trainees.

The firm prides itself on its integrity, stating that it has in the past refused to work on huge and potentially lucrative investigations because the clients in question wanted to interfere in KLA’s work, such as controlling what information firm’s lawyers would have access to. KLA says it wants its clients to be ethical.

Partner Eloy Rizzo is listed in Who’s Who Legal: Investigations and has extensive experience in conducting anti-corruption investigations, including misconduct covered by the Foreign Corrupt Practices Act and UK Bribery Act. He has experience in negotiating leniency agreements with Brazilian authorities and represented companies in administrative and judicial proceedings. He was promoted to partner in 2015.

Filipe Magliarelli joined the firm in 2017 and is described as the firm’s “white-collar specialist”. He represents Brazilian and multinational companies in investigations, criminal proceedings and administrative procedures.

Paulo Prado, who primarily focuses on administrative law and public procurement, often assists KLA’s anti-corruption practice by conducting risk assessments for companies that are bidding for public contracts. Ricardo Reis, meanwhile, focuses his anti-corruption practice on the pharmaceutical and medical sectors, participating in complex compliance investigations. He also has experience in providing compliance advice in the sports industry, having assisted clients during the World Cup and Olympic Games in Brazil.

The firm says that its work with transport company EcoRodovias has kept it busy between 2018 and 2019, having conducted an internal investigation at the company after two of its subsidiaries were accused of misconduct. GIR has previously reported that EcoRodovias agreed to pay US$100 million as part of a leniency agreement with the MPF to resolve allegations that it paid bribes to government officials in the state of Paraná to win a contract to build a highway. The MPF said that US$92.4 million of the fine will go towards repairing road damages.

KLA is representing medical device company Orthofix in an investigation over allegations that it inflated contracts to supply medical equipment to clients including Brazil’s National Institute of Traumatology and Orthopaedics and the health department of Rio de Janeiro. Orthofix’s offices in Brazil were raided in July 2018 and authorities froze US$250 million worth of its assets. KLA managed to overrule the asset freezing order after convincing Rio de Janeiro’s Federal Court of Appeals that there was a lack of evidence against the company and its executives.

KLA also helped Chile’s LATAM Airlines during the company’s Foreign Corrupt Practices Act monitorship that was imposed as part of a 2016 settlement with the US Department of Justice and Securities and Exchange Commission. The monitorship concluded successfully in 2019.

KLA is based in São Paulo and the office includes native speakers of Spanish and English amongst its ranks. It also regularly assists foreign law firms, advising them on Brazilian anti-corruption legislation, including the US-based Miller & Chevalier, Mayer Brown and Paul Hastings among others.

Some of the bigger names in the public domain that KLA has acted for include medical company Orthofix International, transport company EcoRodovias and LATAM Airlines Group.

In 2017 Rizzo and Franco were appointed the Brazilian monitors for Braskem, an affiliate of construction company Odebrecht, as part of a settlement involving multiple authorities, including ones in the US and Brazil, that resolved allegations that the companies bribed government officials in Brazil, Argentina, Angola, Mozambique, Ecuador and Mexico. The bribery resolution, which was worth billions of dollars, is the largest history and also included the imposition of US monitors. Lawyers at Orrick Herrington & Sutcliffe are serving as the US monitors for Braskem.

KLA is a young and dynamic full-service law firm, established in 2002. What makes the firm different and places it among the most modern law firms in Brazil is its way of applying legal knowledge to the business of its clients. The firm not only works with transactional and complex operations, but also dedicates the same effort to daily matters, offering full-time support. It aims to understand the business of the clients and respond with the necessary agility, clarity in communications and practicality. The firm tries constantly to anticipate relevant trends and novelties, aggregating value to its legal services. The partners participate or personally manage all steps of the work and do not distance themselves from the client, since long-lasting relationships are part of the firm’s philosophy. The right professionals are allocated for each matter, with the purpose of obtaining the maximum efficiency in the formation of the teams dedicated to each client and matter, assuring effectiveness and cost control. A top-level team of motivated professionals is located in its São Paulo and Brasília offices, many with academic and professional experience abroad.

KLA’s compliance, investigations and white-collar practice is on the rise in view of a growing concern with corporate responsibility and business sustainability. KLA is one of the pioneers in the area as international directories attest. KLA´s compliance, investigations and white-collar team is multidisciplinary, an essential feature to assist our clients in government investigations with implications in different areas of law. We strive to achieve best practices, suitability for the client’s sector, tailor-made implementations and holistic approaches through the interaction of our team with professional experts from other areas such as regulatory, antitrust, labour, corporate, data protection, among others.

We have unquestionable experience in the following services: coordination of highly complex multi-jurisdictional internal investigations; design, implementation and monitoring of compliance programmes; drafting and revision of policies, codes, guidelines and internal governance controls; compliance training; conduct of risk assessments; assistance with third-party and M&A due diligence; negotiations with local and international authorities and external monitoring.

KLA is ranked as Band 3 in Compliance by Chambers Global and Chambers Latin America and recommended by Latin Lawyer, Legal 500, Leaders League, Who´s Who Legal, among others.

Our team is dynamic and committed to the education and dissemination of the compliance culture. In this sense we actively participate in forums and commissions, promote monthly events and write articles on the subject in the broadest range of publications. 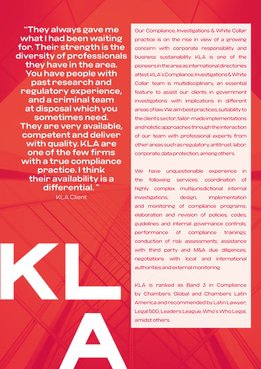