Mayer Brown has boosted its white-collar practice with prominent hires in Chicago and Washington, DC, as it continues to represent some of the world’s largest companies and banks, including HSBC.

The firm’s investigations practice advises clients on a wide variety of high-profile matters from the Department of Justice’s Swiss bank programme to the recovery of the largest known emerald in the world. Mayer Brown has particular prowess in Foreign Corrupt Practices Act matters thanks to partner Laurence Urgenson, who co-leads the firm’s global anti-corruption & FCPA practice with Audrey Harris.

Urgenson, the recipient of GIR’s Outstanding Career Award in 2018, has represented six companies in FCPA settlements since the Siemens case in 2008 – the second most of any lawyer, according to GIR’s FCPA Counsel Tracker. He is also a Who’s Who Legal: Investigations.

Harris returned to the firm in late 2018 after a stint as the first chief compliance officer for Anglo-Australian mining company BHP. Harris was named in GIR’s inaugural Women in Investigations profile in 2015. Also in the practice is Urgenson protégé Matthew Alexander, a GIR 40 under 40 nominee for 2017.

The firm boats several ex-government officials, including former Manhattan federal prosecutor Glen Kopp and Daniel Stein, who joined Mayer Brown in 2018 and 2016 respectively. Stein is a former chief of the criminal division in the US Attorney’s Office for the Southern District of New York. Under his tenure, the office brought diverse cases, including a US$795 million global settlement in February 2016 with telecommunications company VimpelCom. Kopp served in the Manhattan federal prosecutor’s office under US Attorney Preet Bharara. As a prosecutor, Kopp investigated a group of US-based Russian agents in an operation known as the Illegals Program, which was partly the inspiration for the television series The Americans.

Mayer Brown also relies on Washington, DC based partner Richard Ben-Veniste, who was one of the lead prosecutors on the Watergate Special Prosecution Force. In another prominent government probe, Ben-Veniste was chief counsel of the Senate Whitewater Committee which investigated the Clintons’ real estate dealings. The same office also features Ori Lev, the former enforcement director at the US Treasury’s Office of Foreign Assets Control (OFAC), who specialises in sanctions matters.

Alan Linning, previously the executive director of the enforcement team at the Hong Kong Securities and Futures Commission, is the firm’s most prominent white-collar lawyer in Hong Kong. In Paris, partner Nicolette Kost De Sevres heads the local compliance team. Kost De Sevres was special senior counsel in the New York Stock Exchange’s Paris office as well as senior special counsel at the Royal Bank of Scotland in London.

In Brazil, the firm counts Tauil & Chequer Advogados as an associated firm. The white-collar practice is headlined by Luís Inácio Lucena Adams, who was the attorney general of Brazil from 2009 to 2016, and also features partner Michel Sancovski.

The names to know in London are partners Sam Eastwood and Jason Hungerford, who joined in July 2018. Eastwood came to the firm after almost three decades at Norton Rose Fulbright. Hungerford previously worked on the investigation into Swedish telecoms company Telia, which resulted in an almost $1 billion settlement with US, Swedish and Dutch authorities in 2017.

The firm’s Chicago office boosted its capacity to represent financial institutions in investigations, with the hiring of Megan Webster, who was the head of commercial litigation at the Bank of Montreal until she joined the firm in November 2018, and Matt Kluchenek who the firm recruited from Baker McKenzie in January 2019.

GIR has reported that Mayer Brown represented French bank Société Générale in its internal investigation into FCPA violations. In the first-ever coordinated resolution with French and US authorities, the bank agreed to pay $1.3 billion for bribing Gaddafi-era Libyan officials and manipulating Libor. The firm was also counsel to Société Générale over the US Libor manipulation agreements. Société Générale resolved allegations with the DOJ and the Commodity Futures Trading Commission that several employees falsely deflated US Libor submissions.

The case was a landmark moment for foreign bribery enforcement as it was the first joint resolution between authorities in the US and France. In addition, Société Générale’s lawyers were able to tie up different forms of conduct, bribery and benchmark manipulation, in a single resolution – a dream scenario for any client facing legal jeopardy on multiple fronts.

And according to GIR Just Anti-Corruption’s FCPA Counsel Tracker, Urgenson is the monitor overseeing Chilean airline LATAM. The company retained a monitor for three years under its $22.2 million agreement in 2016 to resolve allegations it bribed Argentine union officials to obtain favourable labour contracts. The monitorship ended in 2019 and Urgenson has certified the company’s compliance programme is reasonably designed and implemented.

Urgenson and Alexander represented casino hotel company Las Vegas Sands in its FCPA settlements with US authorities. The firm advised Las Vegas Sands in its April 2016 SEC settlement. A former executive at the company alleged that the owner of Las Vegas Sands authorised a questionable US$700,000 payment to a legislator in Macau. The company did not admit or deny the SEC’s findings, and agreed to pay US$9 million in civil penalties and retain a monitor to settle the allegations.

Then in January 2017, the company settled with the DOJ for US$6.96 million to resolve the matter. The non-prosecution agreement appeared to cover the same misconduct cited nine months earlier in the SEC’s settlement.

Mayer Brown has a formal association with one of Brazil’s largest firms, Tauil & Chequer Advogados.

The firm has bolstered its global network through mergers with one of the largest law firms in Asia, Johnson Stokes & Master, as well as numerous European outfits.

While many of the firm’s current clients are confidential, it has advised the HSBC, Société Générale, Rezidor Hotel Group, Toronto-Dominion Bank and trading company Mitsui Brasil Co.

The firm ran internal investigations related to the Swiss bank programme, under which the DOJ offered non-prosecution agreements to banks that voluntarily told authorities they helped US citizens avoid paying tax. The firm guided five banks to such NPAs in late 2015: Banque Internationale a Luxembourg, BBVA, Credit Agricole, KBL and PostFinance.

Meanwhile, Mayer Brown’s Kelly Kramer represented the former vice president of New Jersey-based Louis Berger International, which admitted in 2015 to FCPA violations and agreed to a $17.1 million deferred prosecution agreement. The DPA resolved charges that the company bribed foreign officials in India, Indonesia, Vietnam and Kuwait to secure government construction management contracts. James McClung, who was responsible for the company’s operations in India and Vietnam, was sentenced in 2016 to a year and a day in prison for FCPA violations.

In London, Mayer Brown represented construction company Sweett Group over an investigation by UK authorities into foreign bribery allegations. The company later changed firm to improve relations with the Serious Fraud Office, according to court filings from February 2016. In February 2017 Sweett Group was convicted of UK Bribery Act violations and ordered to pay £2.25 million.

Mayer Brown has also been helping the government of Brazil to recover the “Bahia Emerald”, a gem worth approximately $400 million. The emerald was recovered in Los Angeles in 2008, and has since been bitterly fought over by several parties. Mayer Brown was instructed by the Brazilian government to help repatriate the emerald.

Mayer Brown is a global legal services provider advising clients across the Americas, Asia, Europe, Africa and the Middle East. We are noted for our commitment to client service and our ability to assist clients with their most complex and demanding legal and business challenges worldwide. We regularly represent and counsel companies and individuals on a wide range of multinational investigations and litigations such as matters involving the FCPA and other global anti-corruption efforts, internal investigations, DOJ/SEC or foreign investigations and enforcement proceedings, compliance reviews, and due diligence regarding mergers and acquisitions.

Our cross-border investigations capabilities are strengthened by our global presence, with regional offices and partners in Asia, Europe, the Middle East and South America. Where knowledge of local laws is required, we work closely with colleagues in our international offices to ensure compliance with any applicable local laws and regulations.

Our team includes numerous former government officials, including many who held high-ranking supervisory positions, federal prosecutors from US Attorney’s offices around the country and lawyers from international and federal regulatory agencies. For example, our team includes a former acting deputy assistant attorney general and chief of the DOJ’s Fraud Section; a former executive director of the Enforcement team of the Hong Kong Securities and Futures Commission; a former assistant chief litigation counsel of the US Securities and Exchange Commission; a former deputy enforcement director of the CFPB; the former chief counsel of the US Senate Judiciary Committee; and chief of the Watergate Task Force. We also boast former UK Financial Services Authority lawyers and the former attorney general of Brazil. Please visit www.mayerbrown.com for more information. 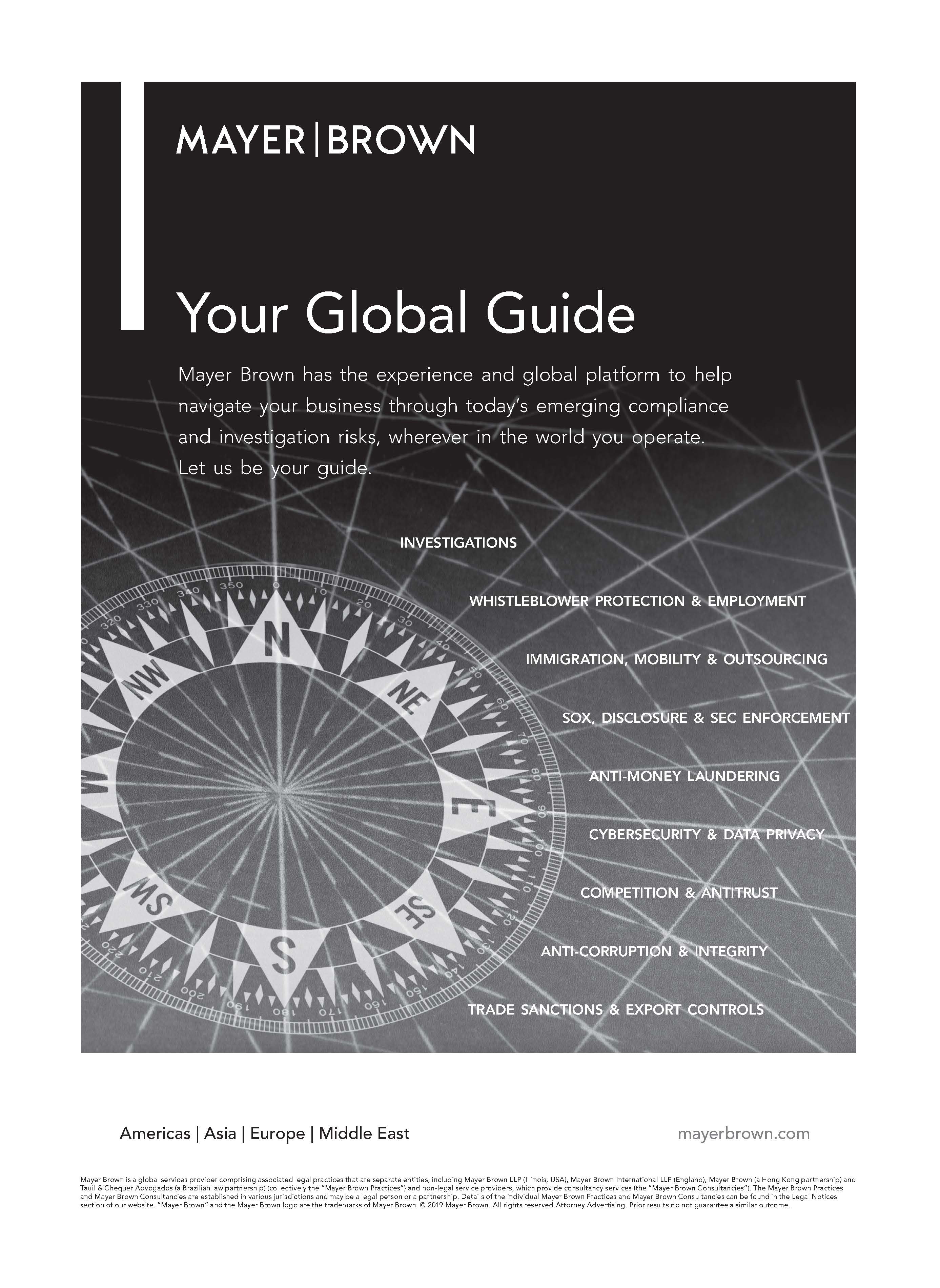