Debevoise & Plimpton’s status as one of the world’s leading global investigations firms is exemplified by its work coordinating separate Italian, US and Dutch bribery investigations into Royal Dutch Shell and past successes in groundbreaking multilateral settlements.

Debevoise has some of the most experienced former government officials in private practice within its investigations offering, which holds over 30 partners and counsel.

As the Obama era wound to a close, top Securities and Exchange Commission and federal prosecutors flocked to the firm. From the SEC, the first was Andrew Ceresney, director of the agency’s enforcement division, who announced his return to Debevoise in January 2017. A month later, the firm secured the return of SEC chair Mary Jo White, whose tenure at the regulator attracted stinging criticism from Democratic Senator Elizabeth Warren in particular, for being too soft on banks. Both former Debevoise partners, White and Ceresney brought a third SEC official with them: Kara Brockmeyer, the longtime chief of the agency’s FCPA unit.

The hiring spree continued into April that year, when the firm added Winston Paes, a top prosecutor at the US Attorney’s Office in Manhattan. And that’s only 2017. In 2016, the firm added Luke Dembosky, formerly the highest-ranking DOJ official focused on cybersecurity issues. And it recruited US District Judge John Gleeson, who retired from the Manhattan federal bench in March 2016. Gleeson is a former federal prosecutor known for his successful conviction of Gambino mob boss John Gotti.

Such high-profile hires are only the latest chapter in the history of a white-collar group that has built its reputation upon the illustrious careers of its members. For White, the return to Debevoise represents her third stint at the firm, where she first worked as an associate from 1976 to 1978. She has led a distinguished career in public service since then, and remains the only woman to have served as US attorney in the nation’s most prestigious prosecuting office, located in the Southern District of New York.

It is the only firm that’s home to both a former US attorney general and a former UK attorney general. Michael Mukasey, who served as the top US prosecutor under President George W Bush, joined Debevoise in 2009. Lord Peter Goldsmith QC PC joined the firm’s London office after serving as the UK’s attorney general from 2001 to 2007. Goldsmith is nominated to Who’s Who Legal: Business Crime Defence. In New York, Bruce Yannett – a GIR editorial board member and nominee to Who’s Who Legal: Investigations and Who’s Who Legal: Business Crime Defence – leads the white-collar and regulatory defence practice. Yannett previously served as a federal prosecutor in Washington, DC. Also based in New York is Mary Beth Hogan, co-chair of the firm’s litigation department.

Lord Goldsmith is joined in London by partner Karolos Seeger, another GIR editorial board member and a Who’s Who Legal: Investigations nominee. Other prominent figures around the globe include Thomas Schürrle, managing partner of the firm’s Frankfurt office, and Mark Johnson, a partner in Hong Kong who specialises in the Asia region. Both are ranked in Who’s Who Legal: Investigations.

The firm added Lisa Zornberg, the Southern District of New York’s former criminal division chief, to its New York office in May. At the Manhattan federal prosecutor’s office, Zornberg oversaw the highly politicised case against Turkish-Iranian gold trader Reza Zarrab and Hakan Atilla, the general manager of Turkish bank Halkbank, who were both convicted in 2018 for violating US sanctions on Iran.

An internal investigation of Moscow-based Mobile Telesystems PJSC (MTS) conducted by partners Colby Smith and Jane Shvets helped the company agree an $850 million settlement in March 2019 with the Department of Justice (DOJ) and SEC. The company, which was represented by Skadden Arps Slate Meagher & Flom and Covington & Burling during settlement negotiations, resolved allegations of foreign bribery in Uzbekistan.

Yannett, Seeger and Eric Grosz act as global coordinating counsel for oil company Royal Dutch Shell in multiple government investigations into alleged bribes paid to obtain a $1.3 billion oil exploration licence in Nigeria. The Milan Public Prosecutors’ Office is prosecuting the company and four former employees, alongside Italian oil company Eni over the matter. In addition to the Italian trial, Shell said in March 2019 that authorities in the Netherlands are preparing to file criminal charges. The company is currently caught up in a privilege dispute with Dutch prosecutors.

Debevoise has acted for several big names in the US special counsel investigation into Russian interference in the 2016 election. Washington, DC partner David O’Neil represents social media company Twitter and its CEO in the probe and also in related US congressional investigations. O’Neil also acted for German bank Deutsche Bank, which was required to hand over information to the special counsel during the probe. The firm has previously represented former acting attorney general Sally Yates in the matter.

Debevoise advised Société Générale on an investigation by the DOJ and France’s National Financial Prosecutor’s Office into allegations that the French bank bribed Libyan officials. In June 2018, the bank agreed two separate US$292.5 million settlements with US and French authorities. A subsidiary of the bank also agreed to plead guilty in the US.

The firm has also been called in by several large corporations to investigate allegations of sexual harassment and assault. For example, the firm is examining allegations against CBS Corporation’s former CEO and former senior newsroom staff. It also represented the Weinstein Company’s board of directors as it investigated vast allegations of sexual assault and rape made against Hollywood producer Harvey Weinstein. Weinstein is set to stand trial on for predatory sexual assault and other charges in New York and has pleaded not guilty.

Debevoise is based in New York City. It has offices in Washington, DC; Paris; London; Moscow; Frankfurt; Hong Kong; Shanghai; and Tokyo.

Debevoise has represented several household names, including Shell, Twitter, Toyota and Home Depot. The firm also has a wealth of clients in the financial services industry, including JPMorgan Chase, Deloitte and American Express.

In 2008, Siemens, the German manufacturing conglomerate, engaged Debevoise to conduct a multi-jurisdictional internal investigation into corrupt payments to foreign officials. Yannett led the investigation with assistance from Seeger in London. The case, which saw Siemens settle for US$800 million in the US, was the largest ever US government FCPA enforcement action. The settlement heralded a new era of stepped-up US foreign bribery enforcement and increased international cooperation between government authorities in the US and German. The company agreed to pay US$1.6 billion overall to settle the case, which included penalties imposed by the SEC and German prosecutors.

Among Debevoise’s highest-profile clients is Toyota, which has recently faced some of the greatest regulatory scrutiny in the company’s history. The firm represented the Japanese car manufacturer in relation to US state and federal investigations, which focused on safety issues relating to vehicle acceleration. In March 2014, Toyota entered into a deferred prosecution agreement with the DOJ, paying US$1.2 billion and agreeing to appoint an independent monitor to oversee its safety practices.

In December 2017, Singapore-based oil rig builder Keppel Offshore & Marine agreed to pay US$422 million to authorities in Singapore, Brazil and the US to resolve allegations that it bribed Brazilian government officials. O’Neil together with Hecker handled the US aspects of the settlement, which was the first coordinated FCPA resolution with an Asian country.

The previous year, Seeger and Yannett brokered a high-profile global settlement for UK engineering company Rolls-Royce. After a four-year probe spanning the globe, authorities in the US, UK and Brazil announced in January 2017 an US$800 million settlement with the Rolls-Royce over allegations that the company paid bribes in multiple countries. In the US, Rolls-Royce entered into a separate deferred prosecution agreement over FCPA conspiracy charges.

The firm’s white-collar and regulatory defence group excels in high-profile, complex representations for clients facing corporate crises. The group’s depth of experience and global reach means it works strategically and effectively with international clients to anticipate and respond to risks, swiftly identifying the root of any problem.

Respected by enforcement agencies, the group’s lawyers are renowned for their investigative skill, seasoned judgement and consistently clear and persuasive presentation of the facts. This makes the team a powerful advocate for clients and leads to considerable success in matters involving investigations by the SEC, the US Department of Justice, the New York Attorney General, the UK Serious Fraud Office and other authorities around the world.

The group is made up of highly experienced partners in New York, London, Paris, Frankfurt, Shanghai, Moscow, Hong Kong, and Washington, DC. It is one of the few in the market to have exceptional capabilities across geographies. Debevoise is the only firm that Chambers & Partners ranks in Band 1 for corporate crime and investigations in both the UK and the US. The team is made up of highly experienced career defence lawyers, as well as former federal prosecutors and regulators.

The group combines this unique understanding of the enforcement landscape with a deep appreciation for client business issues. As leading trial lawyers, but skilled negotiators, a successful outcome for the client is frequently achieved before a trial begins, and government cases are sometimes dropped altogether.

The practice also tailors its solutions, placing an emphasis on flexibility and knowing when to shift gears and adapt to best meet the needs of each unique circumstance. Capabilities are scaled to match the size of any challenge, and adjusted as a case progresses. 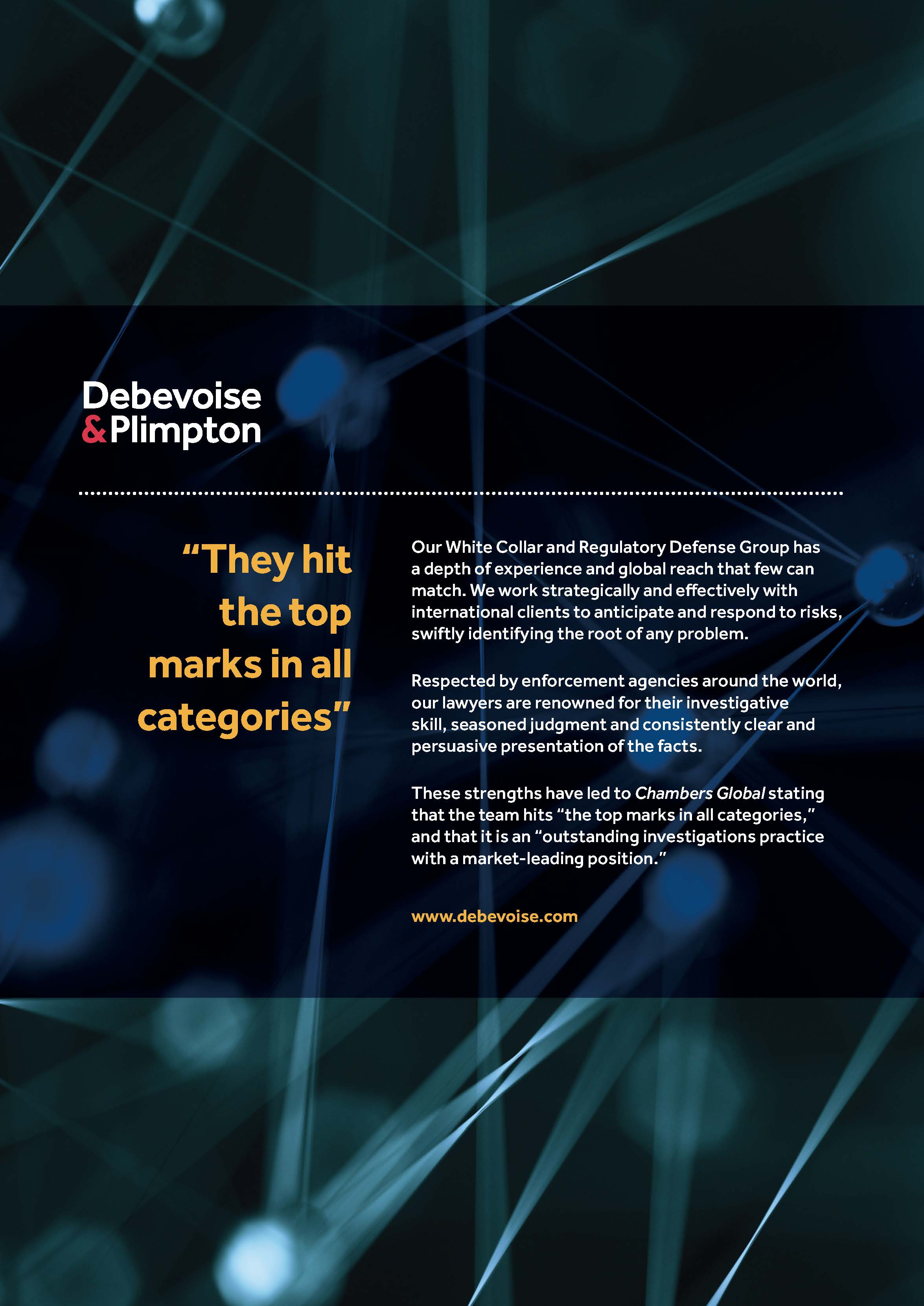