Allen & Gledhill’s young white-collar practice continues to go from strength to strength, taking on the most high-profile of cases.

Since formally establishing its white-collar practice in 2017, Singapore-based Allen & Gledhill has made great strides, representing a number of high-profile clients in headline investigations. The team is playing a role in cases relating to 1MDB, Operation Car Wash and the Sibor/SOR rate-rigging.

Aaron Lee is co-head of the firm’s white-collar and investigation practice, advising on internal policies and procedures that detect, mitigate and address employee misconduct. Before joining private practice, Lee was a deputy public prosecutor and state counsel in the Attorney-General’s Chambers of Singapore.

Jason Chan is the second co-head of the white-collar and investigations practice. He advises local and overseas corporations on compliance management systems to help prevent corporate fraud and corruption. Prior to joining Allen & Gledhill, he was an assistant registrar at the Supreme Court of Singapore and a deputy public prosecutor.

Partner Sanjiv Kumar Rajan works on white-collar defence and fraud investigations, advising clients on matters relating to corruption, insider trading, anti-money laundering and extradition. He is regularly working on multi-jurisdictional and cross-border fraud investigations, coordinating responses by companies to regulatory and criminal enforcement agencies in Europe, the US and Asia.

Partner Vincent Leow acts for banks, corporates and individuals on contentious matters, including those arising from internal inquiries and demands from regulators.

The firm’s deputy head of the white-collar and investigations practice is Lee Bik Wei, a partner whose main areas of practice include civil and commercial litigation and white-collar investigations. She advises multinational corporations, including private and listed companies. As a proficient Mandarin speaker, she also advises Chinese clients.

The firm is representing United Engineers Developments in a fraud and corruption investigation. The firm filed criminal complaints with the Corrupt Practices Investigation Bureau (CPIB) following an internal investigation in 2015, which found that substantial sums had allegedly been misappropriated from the company. The CPIB brought criminal charges against several defendants in December 2016, and in 2017 a former executive was sentenced to 14 years in jail for money laundering and cheating offences. The criminal proceedings concluded in December 2018, with four defendants pleading guilty to the charges against them and receiving prison sentences. Civil proceedings, however, are ongoing, and Allen & Gledhill is trying to help United Engineers Developments to recover the money it lost in the fraud scheme.

The firm also recently acted for RBC Royal Bank’s Trinidad and Tobago branch in one of the largest money laundering cases in Singapore. The bank had been the victim of a wire-transfer fraud in which $3.2 million was wrongly transferred from Trinidad and Tobago to Singapore. The team from Allen & Gledhill led the investigation into the fraud as well as the recovery action, in a probe which also reached Malaysia. The firm secured a conviction in November 2017 against Ambrose Dionysius, former director of Hayashi Construction and Engineering, but an appeal of his five-year jail sentence is currently in the pipeline.

Allen & Gledhill is based in Singapore and also has an office in Yangon, Myanmar. The firm is part of a regional network that includes Rahmat Lim & Partners, an associate firm in Kuala Lumpur, Malaysia. Partners also regularly travel to other Asian countries, such as Indonesia and Vietnam, to carry out investigations work.

The firm has worked for Singapore Technologies Marine, the Monetary Authority of Singapore, United Engineers Developments, and RBC Royal Bank. It has also taken on work representing the National Kidney Foundation and Ikano Bank, established by the founder of furniture retailer Ikea.

Over the past decade, the firm has acted in several high-profile cases. It represented the National Kidney Foundation in malpractice, and financial investigations of the CEO and directors for alleged breaches of fiduciary duties and conspiracy to mislead the company by submitting false invoices. The investigations led to criminal prosecutions against the former chairman, former treasurer and a board member, as well as the recovery of damages.

The firm represented senior pastor Kong Hee from the City Harvest Church, who was accused in 2013 along with five others of illegally misusing U$17 million of church funds. The case was one of the longest criminal trials in Singapore’s history, spanning almost three years after it started in 2013.

Allen & Gledhill advised engineering company Singapore Technologies Marine, in one of the largest graft scandals in Singapore’s corporate history. Ong Teck Liam, then group financial controller, allegedly played a role in claiming US$18 million in bribes as entertainment expenses between 2000 and 2011. Following an internal investigation by the company and a criminal probe by the CPIB, which spanned several years, the agency obtained the convictions of all the employees it charged with corruption and falsification of accounts. Allen & Gledhill lawyers advised company officers who were called as witnesses during the proceedings.

Our market-leading white-collar and investigations practice brings together former prosecutors, former judicial officers and white-collar and criminal defence lawyers, with extensive and specialist experience to offer unique perspectives and deliver practical and holistic solutions to the risks and challenges faced by our clients.

We advise and assist local and international financial institutions, public-listed companies and corporate clients on corporate investigations, multi-jurisdictional regulatory and criminal investigations, and white-collar compliance issues. Many investigations we handle involve allegations of fraud, insider trading, anti-money laundering, corruption, market misconduct, employee misconduct, and other corporate-governance related issues. In some cases, these investigations lead to civil proceedings against errant individuals, and we have successfully obtained recovery for our clients in such related civil proceedings. We have also represented private individuals prosecuted for white- collar crimes. We are able to offer a different perspective to our clients, given that we do not only act on behalf of the subjects of regulatory investigations – we have also acted on behalf of the regulators themselves. Our work is complemented and enhanced by our industry-leading financial and corporate regulatory and compliance teams, with whom we work closely to provide innovative legal solutions. Our firm has been involved in white-collar investigations for more than three decades.

Our firm has acted in numerous higher profile disputes, including claims by the National Kidney Foundation, the inquiry into Ren Ci Hospital, and the prosecution of a senior pastor of City Harvest Church in one of Singapore’s longest-running white collar criminal trial.  We have also been involved in some of the largest private sector corruption cases representing a range of clients including Ikano (IKEA), Singapore Technologies Marine, and high-profile market misconduct cases related to 1MDB and SIBOR/SOR rate-rigging. We are presently involved in one of the largest regulatory investigations where multiple regulatory and enforcement agencies have commenced a joint investigation for potential offences under the Securities and Futures Act and Companies Act. Our firm has also acted in court proceedings on behalf of the Monetary Authority of Singapore and the Inland Revenue Authority of Singapore.

The past few years have seen significant activity and sophistication in the area of white collar, regulatory investigations and enforcement. It is crucial for our clients that are involved in investigations and prosecution to have immediate access to timely and expedient solutions and advice, in order to be sufficiently prepared to deal with such issues. Our breadth and depth of expertise and experience give our team a decided advantage in dealing with unique commercial challenges and reputational risks in such cases. 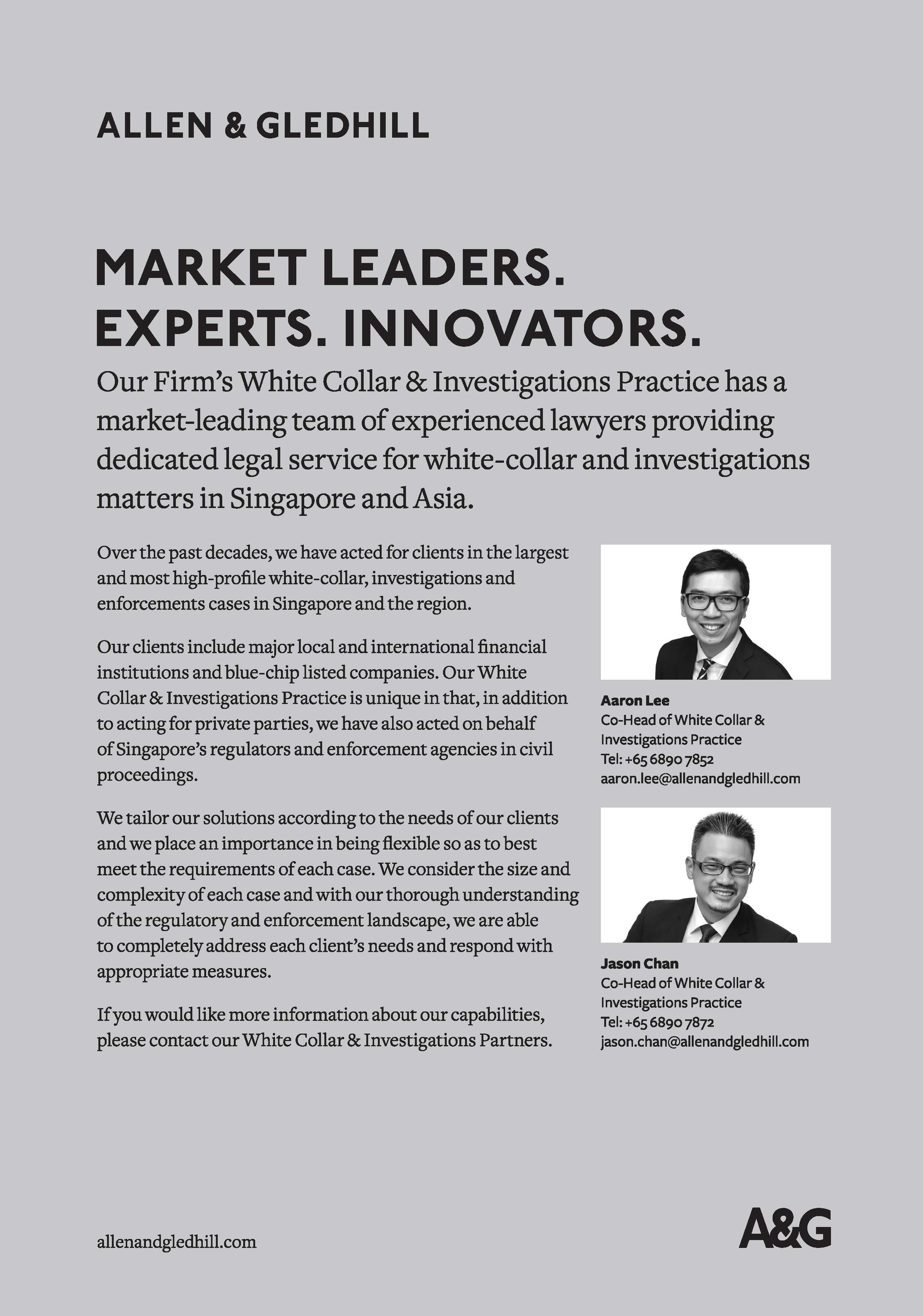