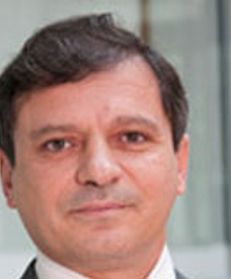 Carlos de los Santos is the head of the litigation and arbitration department at Garrigues, where he has pursued his entire professional career. He has been a partner since 2003 and has headed Garrigues’ Litigation and Arbitration Department since 2009, with more than 250 lawyers across all of the firm’s offices in Spain and abroad, taking in everything from the civil and corporate/commercial litigation practices to domestic and international arbitration and criminal law.

He practises law in the fields of civil and corporate/commercial law and domestic and international arbitration. As a lawyer, he has acted in high-profile court and arbitration proceedings on all manner of contractual and corporate matters, advising and representing companies in the banking and finance industries, insurance, the audiovisual industry, telecommunications, the automobile industry, energy and construction, acting on behalf of both Spanish and foreign companies.

Elsewhere, he has advised on issues concerning bilateral investment treaties in relation to businesses investing in countries such as Turkey, Venezuela, Uruguay, Cuba and Ecuador. Carlos de los Santos has been singled out for inclusion in the leading directories, such as Chambers and Partners (Europe and Global), The Legal 500 and Which Lawyer? as a noteworthy lawyer in the litigation and arbitration practice, ranking Garrigues among Spain’s leading firms in this area. In the words of one of the directories, Carlos de los Santos has been praised by clients for: "apart from his technical knowledge, he has a lot of experience and is practical" noting that "he will see beyond the purely legal considerations and is realistic" and highlighting that "he avoids unnecessary reviews and explaining solutions which aren't viable".

Carlos de los Santos is a regular speaker at seminars on procedural law and arbitration, including his work either as a speaker or moderator annually at the Spanish Arbitration Club Congresses or the International Arbitration Congresses held at Lima and Cuzco (Perú) and San José (Costa Rica), amongst others, such as his participation as a speaker in the event organised by ICC International Court of Arbitration, ICC Spain and the Spanish Arbitration Club  to present the ICC Revised Rules of Arbitration, held at Madrid on May 2017, or his participation as a moderator on “Commercial and investment arbitration: an adequate mechanism for the companies” at the II ICC – CIAMEN Forum, held at Madrid on October 2016. Carlos has also lectured at the Instituto de Empresa (IE Law School) on the Arbitration Practice Course.