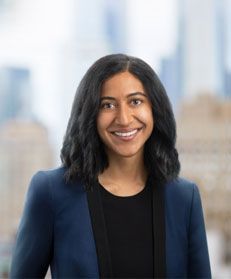 Avni Patel is an experienced litigator and trial attorney who has represented individuals and corporate clients in complex, sensitive and high-profile cases including in federal, state, and local criminal and regulatory matters. Her practice focuses on white-collar criminal defence, government investigations and regulatory enforcement, and complex litigation. At Walden Macht & Haran (WMH), Avni was part of the trial team who successfully defended a corporate client in a high-profile public corruption case in the Southern District of New York. They won the only acquittal in the highly contested and publicised four-defendant trial. She also is part of the WMH team representing one of the most significant whistleblowers in sports history. Additionally, Avni was on the leadership team of the independent monitor named by the US Department of Justice to oversee General Motors’ compliance with its obligations under the deferred prosecution agreement stemming from its recall of defective ignition switches. Before joining WMH, Avni served as an Assistant District Attorney for five years in the Bronx County District Attorney’s Office. In those five years, Avni tried over 15 felony and misdemeanour cases to verdict – five of them to jury verdict – on charges ranging from attempted murder to grand larceny. Avni is a graduate of Boston University School of Law and Northwestern University.