Black investigations lawyers on challenges: “It was absolutely more difficult for me to succeed”

Hogan Lovells partner Lillian Hardy remembers being asked, recently, by the general counsel of a client she was working with if she could lower her attorneys’ fees because the tiebreaker between her and a lawyer from another firm was her diversity. Hardy said the in-house lawyer wanted a discount commensurate with that decision.

“He was essentially telling me, ‘You’re worth less as a practitioner to me because you’re a black woman, and so I want you to adjust your rate schedule to account for the fact that I didn’t take who I could have hired,”’ Hardy said. “And I let him know that our firm based our attorney rates on experience and skill rather than race.”

Hardy is one of nine lawyers of colour GIR spoke to who shared their personal experiences working in the white-collar defence and investigations space. The lawyers described how at times they’ve been unable to gain access to certain opportunities and been overlooked to lead large and complex investigations. They also gave advice to lawyers of colour who are just starting out and shared steps law firms can take to address racial inequality.

“It was absolutely more difficult for me to succeed”

Racial injustice and inequality in the United States is at the forefront of conversations following the death of George Floyd, an unarmed black man who was killed in May by a white police officer in Minneapolis. His death sparked outrage and brought millions across the US and the rest of the world to protest against police brutality and systematic racism.

The social unrest has also helped prompt the legal industry, including the white-collar defence sector, to confront race inequality and to acknowledge its implicit bias against lawyers of colour and their lack of representation at the bar. “I do think there is an opportunity at this moment in history and in time… in the wake of George Floyd and others who have been killed…to open the nation’s consciousness to look inward,” said Obiamaka Madubuko, a shareholder at Greenberg Traurig. Madubuko, a first-generation Nigerian American, focuses her practice on anti-corruption and fraud matters and advises US-based companies doing business in international markets.

To overcome racial bias, black lawyers said they’ve had to work and fight harder and speak up more to earn the same opportunities as their white colleagues.

“For the most part, I really had a fantastic experience,” said Angela Crawford, partner at Crawford & Acharya and the former DLA Piper Miami office chair of litigation. “That being said... it was absolutely more difficult for me to succeed and gain access to opportunities, which was directly related to the fact that I was an African-American woman.” 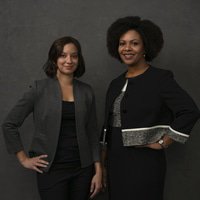 Crawford recently launched a boutique compliance and investigations firm with her partner Lila Acharya, a former in-house compliance counsel at Rolls-Royce. The pair branched off on their own to create new opportunities for themselves and combine their three-decade legal and international experience.

“Breaking into those networks is key”

Like any industry, a personal referral can go a long way to advancing a career, and that is particularly true in the white-collar defence bar. The network is often exclusive and lacks a diverse group of people, which makes it challenging for black lawyers and other diverse attorneys who are trying to get their foot in the door, say practitioners.

Roger Fairfax, a law professor at The George Washington University who teaches courses on white-collar defence, said: “Breaking into those networks is key.”

He added that it’s important for white-collar groups to think about minorities and women when they’re making referrals.

“Those referrals often go to people that look like them or have the same background as them or people that they can relate to,” said Warren Allen II, a former counsel at Skadden Arps Slate Meagher & Flom. “I think that’s one of the key areas in white-collar where you see diverse attorneys struggle a bit.”

Like Crawford and Acharya, Allen and his partner Ray McKenzie recently founded a white-collar boutique firm, called WTAII, in Arlington, Virginia. The firm focuses on government and internal investigations, compliance programmes and anti-corruption due diligence.

Allen cautioned that the person who might be best suited to help young lawyers of colour might not necessarily look like them. He said the strongest advocate he’s ever had – at Skadden – was an older, white Jewish Republican attorney who helped him secure almost every good relationship at the firm.

“Don’t necessarily think somebody has to look like you to be willing to help you,” Allen said.

According to a yearly diversity report by the National Association for Law Placement, less than 2% of partners in Big Law are black or African American – in Washington, DC, where a large bulk of corporate defence attorneys are based, the portion is 3%. The report also found that minority women are particularly underrepresented at the partnership level. They made up just 3.45% of partners – only 0.75% of partners were black women. A recent Law.com report called out many firms with well-renowned investigations practices – such as Cravath Swaine & Moore, Debevoise & Plimpton and Quinn Emanuel Urquhart & Sullivan – for having too few black equity partners.

“I think the fact that there’s few people of colour in the investigation space has more to do with just the lack of diversity in Big Law generally than anything specific about this space,” Acharya said.

Despite the progress that some law firms have made to address racial inequality in the workplace, minorities in general are not represented enough in white-collar defence and particularly in compliance and investigations.

Top partners in Big Law and executives at companies tend to assign white men to handle high-profile cases where the stakes are high – at the expense of black lawyers, other ethnic minority groups and women who are equally accomplished. Companies caught up in high-profile investigations have a lot to lose financially and will want to preserve their reputation and avoid debarment. When making decisions in a high-pressure environment, diversity among the company’s legal advisers becomes an afterthought, it seems.

“When the exposure is that high, a lot of stuff takes a back seat,” Allen said, referring to selecting diverse lawyers to handle high-profile investigations. “A lot of it becomes who has the best reputation with the prosecutor.”

According to data compiled by GIR, since 2004 over 90% of monitors selected in Foreign Corrupt Practices Act settlements are white. Only four black male lawyers (6.5% of monitors) have been picked since 2004 and no women of colour have ever been selected. And in FCPA settlements since 2008, only about 10% of listed legal teams included a lawyer with a diverse background. Earlier this year, for example, European aircraft manufacturer Airbus, which reached a $4 billion bribery settlement, relied on 20 listed external legal advisers – they were all white.

In recent years, however, there has been an uptick in black lawyers taking leading roles in large FCPA settlements, including WilmerHale’s Ron Machen who represented Panasonic Avionics, and Cheryl Scarboro, partner at Simpson Thacher & Bartlett, who advised Ericsson. Meanwhile, Kwame Manley at Paul Hastings, who was selected to handle the Panasonic monitorship, is one of three black men to serve as an FCPA monitor since 2016.

Crawford said that she has heard and experienced situations where lawyers of colour and women are selected to handle cases involving sexual assault or employment discrimination. Those lawyers, however, are equally capable of handling other large and complex investigations – such as fraud and corruption – that are not necessarily related to race and gender, she said.

“Law firms and in-house counsel need to do a much better job of being more objective in how they’re going to staff these matters,” Crawford said. “There are brilliant attorneys who are women, who are diverse and who can excel in these sophisticated matters if provided with the same opportunities, exposure and chance to do so that white male attorneys are routinely given.”

Another major challenge that firms need to address is how to keep, train and promote young lawyers of colour once they’ve been hired. Lawyers GIR spoke to said that law firms should invest in attracting and retaining diverse talent.

“Hiring law students is the easy part,” said Allen. “The challenging part is who gets the growth opportunities and who gets the consistent mentorship and sponsorship.”

Madubuko said that firms need to proactively think of steps they can take to retain talent. Her recommendations include giving them access to quality work, making them more visible to clients and allowing them to showcase their talent. She also said that firms shouldn’t be afraid of asking young lawyers of colour what support looks like for them.

The attorneys GIR spoke to said that law firms have to take proactive and meaningful action to address racial inequality in the workplace, including the white-collar space.

Crawford said that the first step is for law firms to acknowledge that the experiences of black lawyers are different and more challenging which is directly related to the history of race in the United States. She also said that law firms should have honest and open conversations about compensation, work credits and assignments.

“In order to advance the ball meaningfully, law firms have to acknowledge that and take concrete and bold steps to change it,” Crawford said.

Acharya added that companies should also be part of the conversation because they tend to choose to work with the same lawyers repeatedly. She said continuing that practice limits companies from considering other options and diversifying their bench of lawyers.

“I would hope to see that companies are now really rethinking what their bench of legal support looks like and how they can diversify that,” Acharya said.

Advice for young lawyers of colour

First and foremost, it’s crucial that young associates of colour find mentors and sponsors who can show them the ropes and introduce them to different networks so they can build relationships and continue to seek it out throughout their careers.

Madubuko said that they need to find mentors who can champion their cause and help open doors and opportunities for them. She also advised young lawyers of colour to join bar associations, take leadership positions and showcase their work.

She added even if there aren't a lot of people in the industry that look like them, they should still be confident in themselves and their work. “Don’t let others define you or your success,” she said. “You need to have a strong central core and know your worth and your values, and don’t let anybody else try to shake that.”

Find out who's advising whom.