GIR Awards 2021: Enforcement Agency or Prosecutor of the Year and Outstanding In-House Counsel 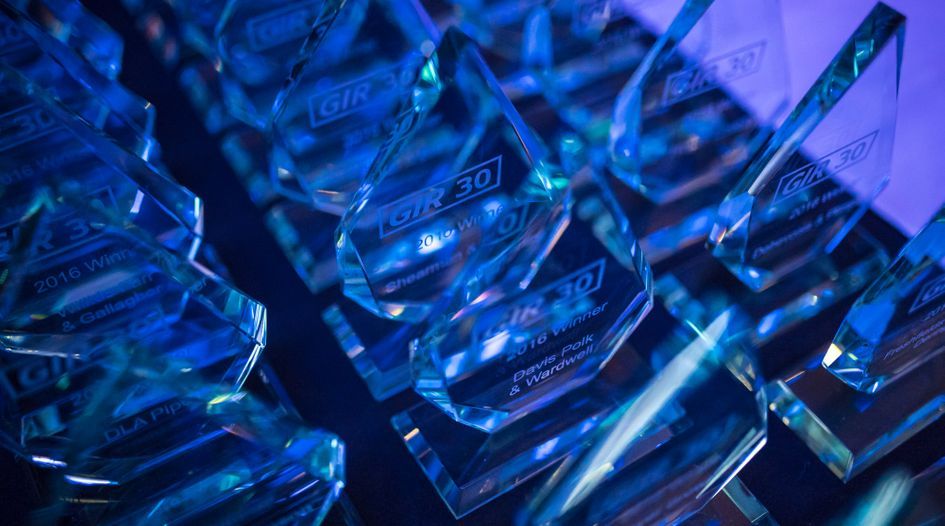 GIR unveils the shortlists for the top enforcement agencies and in-house professionals during the past year. The winners will be announced at GIR’s seventh annual awards ceremony, which will be held in Washington, DC on 9 November.

Read on for the nominees in the categories Enforcement Agency or Prosecutor of the Year and Outstanding In-House Counsel.

The shortlists for the next awards categories, including a new award to recognise an Investigations Practitioner of the Year, will be released in the coming days. Yesterday, GIR announced the nominations for Most Important Court Case of the Year and Most Important Development.

The evening will provide a chance to celebrate the investigations professionals and practices that have impressed most in the past year. GIR’s top 30 investigations practices, as part of our annual GIR 100 research, will also be unveiled. The ceremony will be held in aid of Swawou Layout Girl’s School in Kenema, Sierra Leone, which helps disadvantaged girls in the region.

The Australian Transaction Reports and Analysis Centre (Austrac) secured an impressive result earlier this year when it fined Australian bank Westpac AU$1.3 billion (US$920 million) over allegations that the bank breached the country’s money laundering law on 23 million occasions, including by processing transactions linked to child exploitation. The fine came amid a growing belief among the Australian bar that Austrac is growing teeth as an enforcer, having levied the two largest penalties in the country’s history in just over two years. Aside from the Westpac settlement, it was revealed in June that Austrac opened an investigation into National Australia Bank for allegedly failing to comply with anti-money laundering requirements.

The National Financial Prosecutor’s Office (PNF) has had yet another stellar year, notably thanks to its definitive conviction of Teodoro Obiang, the vice-president of Equatorial Guinea. France’s highest court upheld Obiang’s conviction for embezzlement in July after 14 years of proceedings, paving the way for roughly €150 million in stolen assets to be potentially returned to the citizens of Equatorial Guinea. The PNF has also continued to secure a steady stream of deferred prosecution agreements (DPAs) over the past year, negotiating multi-million-euro corruption settlements with French companies Systra and Bolloré and a €25 million tax evasion DPA with investment bank JPMorgan.

Ecuador’s Office of the Attorney General

The Ecuadorian Attorney General’s Office has established itself as an authority to watch under the leadership of career prosecutor Diana Salazar Méndez, who previously led the agency’s anti-money laundering unit before being appointed the country’s Attorney General in 2018. Méndez’s office has notably gone after high-profile public officials in the past year. In April, Méndez’s office announced plans to arrest the country’s state comptroller general and several others as part of an investigation into state oil company PetroEcuador’s contracts from 2017 to 2020. During the covid-19 pandemic, Salazar set her sights on corruption in the public health sector, launching a 40-person task force to probe such matters in June 2020. High profile officials caught up in the task force’s subsequent investigations have included the country’s former president.

The Geneva Public Prosecutor’s Office scored a significant victory in January by obtaining the conviction of controversial mining magnate Beny Steinmetz. A court found him guilty of bribing a public official in Guinea to secure a lucrative iron-ore mining licence. The Geneva case was the first time Steinmetz has been convicted over his role in a long-running dispute over mining rights in Guinea, which has been the subject of corruption probes across the globe. Swiss practitioners described Geneva prosecutors’ success in the Steinmetz case as a “milestone” achievement. The case against Steinmetz was prosecuted by Yves Bertossa who previously conducted investigations into London-based HSBC and Chinese oil company Addax – both of which resulted in corporate settlements with the office. Steinmetz denies wrongdoing and has appealed against his conviction.

For the Geneva Public Prosecutor’s Office

A busy 12 months has seen Sweden’s National Anti-Corruption Unit, a 10-prosecutor strong department in the Swedish Prosecution Authority, charge five individuals in connection with two high-profile international corruption cases. In May, the unit charged four former executives of Stockholm-based telecommunications company Ericsson with taking part in a scheme to bribe Djibouti's attorney general to help the company win lucrative tenders to state network provider Djibouti Telecom. The unit also charged a former executive at Canadian engineering company Bombardier in June with bribing an Azerbaijani official as part of a scheme to obtain a $340 million rail contract.

South African authorities are drawing more international attention for their work on corruption investigations. South Africa’s National Prosecuting Authority (NPA), the country’s criminal enforcer, and Special Investigative Unit (SIU), a civil agency that investigates government corruption, have been probing wide-scale corruption in the country. They are also eyeing major corporations. They are looking into Swiss-Swedish robotics company ABB over its business dealings with the country’s state utility company Eskom. ABB has previously said it is cooperating with the authorities as well as those in the US, who also have their eye on the matter. In another matter that the US is looking into, the SIU and NPA are also investigating Canadian aircraft maker Bombardier over some business “irregularities” with the South African railway company Transnet.

The US Department of Justice’s kleptocracy asset recovery initiative has made great strides towards recovering and returning stolen funds to victims of corruption. The initiative, which was launched 10 years ago in the Money Laundering and Asset Recovery Section, has repatriated stolen funds to countries such as Nigeria and Malaysia in an effort to compensate victims following massive corruption schemes. To date, the DOJ has repatriated over $1.2 billion in misappropriated funds to Malaysia following the corruption scandal at the country’s development fund, 1MDB. Assets the DOJ has its eye on, or has already secured, from the scheme include luxury real estate in Beverly Hills and a penthouse in New York City as well as artwork by Andy Warhol.

Aparna Bawa was the top lawyer for Zoom when its growth soared as a result of the pandemic and the company became a ubiquitous part of working life across the globe. All eyes were suddenly on the company as Bawa, chief legal officer and chief operating officer, guided Zoom through a meteoric surge in users and, of course, a slew of legal matters and the continued growth of its compliance programme. Bawa ushered Zoom through a February settlement with the Federal Trade Commission over allegations that it misled consumers about the level of security it provided for its meetings. The company was required to enhance its security practices as part of the settlement. Zoom also disclosed DOJ and SEC investigations into the company over its interactions with China and other foreign governments. The company, which is conducting an internal investigation, said it is cooperating with the authorities who have requested information over various security and privacy matters.

Rashida La Lande joined Kraft Heinz as general counsel in 2018, and was soon after taking the reins on an SEC investigation into the company’s procurement practices. La Lande, who previously spent over 17 years at Gibson Dunn & Crutcher, guided Kraft Heinz through an internal investigation and its cooperations. The resolution was completed in September when Kraft Heinz entered a $62 million settlement with the regulator for allegedly engaging in a long-running illegal expense management scheme that resulted in several years of false accounting. Kraft neither admitted to nor denied the misconduct, and the company said it fully cooperated with the SEC and took prompt and extensive remedial steps.

It’s hard to think of a better endorsement of a company’s compliance programme than one from the World Bank, and under Dirker’s leadership as chief integrity officer, Canadian engineering company SNC-Lavalin achieved just that. In April, the World Bank decided to end SNC’s debarment two years early. The bank debarred SNC for 10 years in 2013 after the company paid bribes in Bangladesh and committed further misconduct in Cambodia. But after recognising SNC’s significant compliance upgrades that were checked by a third-party monitor, the World Bank felt confident that it could do business safely with SNC.

James Freis’ short time at Wirecard was quite remarkable: he almost immediately uncovered a multibillion-dollar fraud in June 2020 that rocked the German financial services industry. His eventful seven months at German payments company Wirecard saw him promoted from head of compliance to acting CEO on just his second day in the job. Under Freis’ leadership, Wirecard began insolvency proceedings and started cooperating with a fraud investigation by the Munich public prosecutor’s office. Freis, who previously headed the US Treasury’s Financial Crimes Enforcement Network from 2007 to 2012, left Wirecard in December to start his own consulting firm in Washington, DC.

Catherine Razzano, vice president and chief compliance officer of Panasonic Avionics, led the California subsidiary of a Japanese electronics company to complete its two-year FCPA monitorship with the DOJ in March. The monitorship was ordered as part of the company’s 2018 resolution in which it agreed to pay $280 million to the DOJ and SEC over foreign bribery charges. Razzano worked alongside Paul Hastings partner Kwame Manley who was selected to oversee the monitorship. The company admitted in 2018 that certain employees, including senior executives, participated in a scheme to retain consultants for improper purposes and conceal payments to third-party agents in the Middle East.

Goto was instrumental as chief compliance officer to BRF, the world’s biggest poultry exporter, during a difficult time for the company. BRF was under investigation in the US and Brazil over potential bribery of Brazilian government food inspectors to allow the sale of rancid meat. But, with Goto’s help, the company secured a declination from the DOJ, which the company announced in May. The DOJ’s decision not to bring an enforcement action followed a similar announcement in February that the SEC closed an investigation into the company, also without bringing any action. The company has previously said it is cooperating with Brazilian authorities; the Brazilian investigation was first announced in 2017. In a related matter, BRF agreed to pay $40 million in 2020 to settle a class action lawsuit brought in Manhattan. Investors who sued BRF had accused the company of misleading them about its compliance practices.

GIR will announce more shortlists for the upcoming GIR Awards ceremony in the coming days.