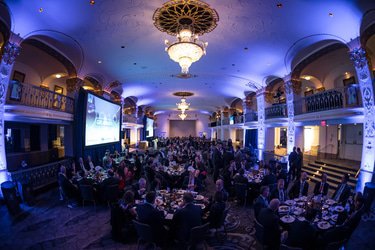 GIR will hold its fifth annual awards ceremony on 24 October in Washington, DC, at the Four Seasons Hotel.

Read on for the nominees in the categories of Most Impressive Investigations Practice of the Year and Most Important Development in the Practice or Law of International Investigations.

The 2019 Awards will take place on the evening of 24 October after the inaugural GIR Live Sanctions, Export Control and National Security conference.

The black-tie event will provide a chance to celebrate the investigations lawyers and practices that have impressed most in the past year and is held in aid of Swawou Layout Girl’s School in Kenema, Sierra Leone, which helps disadvantaged girls in the region.

GIR’s top 30 investigations practices will also be unveiled on the night and the event will culminate with a career achievement award for one exceptionally respected and admired individual.

Most impressive investigations practice of the year - the nominees:

The firm has had an incredibly active year all over the world, working on some of the biggest cases of the last 12 months. In the UK, it helped outsourcing company Serco sign the UK’s fifth deferred prosecution agreement (DPA) to resolve fraud and false accounting allegations. In approving the DPA, the judge praised Serco’s cooperation and willingness to implement compliance reforms. Clifford Chance was one of the firms that worked on UniCredit Group’s $1.3 billion resolution with US authorities over an investigation into sanctions violations. UniCredit Group, including the Munich branch that Clifford Chance represented, agreed to ramp up its sanctions programme and internal controls. Elsewhere in Europe, Clifford Chance was hired by Swedish bank Swedbank to investigate a sprawling money laundering scheme that has ensnared banks across the continent. The firm is also advising the former CEO of software company Autonomy, Mike Lynch, in the UK’s ongoing largest civil fraud trial related to fellow software company HP’s acquisition of Autonomy.

Latham & Watkins has had a standout year. Once a company discovers serious wrongdoing, it typically hopes for a fast resolution and dreams of a declination. In one of the most remarkable settlements of 2019, Latham & Watkins (together with DLA Piper) advised US information technology company Cognizant Technology Solutions as it secured a declination for foreign bribery, after it had self-reported the conduct less than three years earlier (a fast turnaround by FCPA standards). Some of Cognizant’s top executives were charged with related wrongdoing – a factor that would normally sway prosecutors to consider charging the company itself. In another quick turnaround, US authorities in 2019 closed an FCPA investigation sparked by a short-seller report in 2017 that accused Latham’s client, Californian technology company OSI Systems, of bribery. Latham (alongside White & Case) also steered US information technology giant Microsoft to a non-prosecution agreement for foreign bribery. Beyond the FCPA, the firm is representing companies on high-profile sanctions and trade theft secret cases.

The firm continues to be a global leader in the investigations space. In 2017, Paul Hastings won GIR’s Most Impressive Investigations Practice of the Year after steering Braskem to a trilateral foreign bribery settlement. This year, the firm once again played a pivotal role in guiding a major natural resources company to a multilateral resolution. Oil and gas company TechnipFMC paid $300 million to settle bribery charges brought by two US authorities and three Brazilian agencies. The feat was impressive given the propensity of Brazilian authorities to bicker over how a case should be resolved, leading to staggered settlements. The resolution was also remarkable because TechnipFMC, a recidivist, avoided the imposition of a monitor. This type of result no doubt explains why Paul Hastings is working on some of the biggest cases today, including investigations into Airbus, SAP and 1MDB. The DOJ clearly has faith in Paul Hastings too; one of the firm’s partners is acting as a monitor for a company that agreed an FCPA settlement.

Skadden Arps has continued to prove that it remains a market leader in handling major corporate crises. In 2019, the firm worked on a number of difficult cases for clients covering a range of crimes. Skadden spearheaded Russian telecoms company Mobile TeleSystems’ settlement negotiations with the US authorities to resolve allegations of bribery in Uzbekistan. Ultimately, the company agreed to a $850 million penalty and a three-year monitor. The firm represented UniCredit’s Austrian subsidiary in a wider $1.3 billion sanctions settlement between the bank and US authorities. Skadden’s client netted a non-prosecution agreement for its cooperation with authorities. The firm’s impressive year has allowed it to shake off an embarrassing episode that saw it settle with the DOJ over alleged violations of the Foreign Agents Registration Act (a former partner was acquitted in September by a federal jury in a related case).

WilmerHale is well known for advising major corporations on the biggest cases – this is the fourth year in a row that the firm has been shortlisted for Most Impressive Investigations Practice (it won in 2016). In the last year, WilmerHale has demonstrated another major part of its investigations practice: its ability to help individuals through massive trials. In the US, the firm secured the swift acquittal of Rohan Ramchandani, a former forex trader at Citibank in London. The WilmerHale team won the case after a three-week trial, with jurors deliberating the verdict for roughly half a day. Another of WilmerHale’s successes came in the form of the acquittal of Jean-Daniel Lainé, a former executive at Alstom Network UK, who was cleared by a UK jury of a conspiracy to corrupt charge concerning allegations that the company paid bribes in Hungary to secure contracts for the Budapest Metro System.

Most important development in the practice or law of international investigations of the past year – the nominees:

Cognizant Technology Solution’s resolution with the Department of Justice over alleged bribery in India illustrates a shift in enforcement of the Foreign Corrupt Practices Act. The DOJ declined to prosecute the New Jersey-based information technology company, instead issuing a declination with disgorgement. The decision was remarkable because of the nature of the scheme to pay officials in India, which allegedly involved executives at the top-tier of the company. The DOJ did bring charges against the company’s former president and ex-chief legal officer. Prosecutors issued the declination and charged the individuals within three years of the company voluntarily reporting the conduct. The case is a model for how the department wants to enforce the FCPA.

TechnipFMC’s settlement with Brazilian, US authorities

Oil and gas company TechnipFMC’s bribery settlement in June was a landmark for cooperation between authorities. Its $300 million resolution marked the first time the US Department of Justice and Securities and Exchange Commission settled a matter with Brazil’s Office of the Comptroller General, Federal Prosecution Service and the Office of the Attorney General. In the past, there have been difficulties in securing the simultaneous agreement of all three Brazilian agencies. TechnipFMC resolved bribery charges relating to Brazil and Iraq. However, the company was unable to simultaneously resolve an investigation by French authorities.

Mr Justice Robert Hildyard’s ruling in February has had repercussions for information-sharing between the UK and the US. He rejected software company HP’s application to hand over information it received from defendants in a UK civil trial to US authorities following a grand jury subpoena. In doing so, he reinforced the English and Welsh civil procedure rule that a court must give permission before any documents obtained through proceedings are handed to third parties. The judge said that HP’s counsel had failed to prove that US authorities needed the material for their investigation. His judgment also said that handing over the documents to the US government may give prosecutors an unfair advantage over the defendant, Mike Lynch.

UK bank Standard Chartered settled an “egregious” sanctions case with authorities in the US and UK for $1.1 billion, exceeding the $900 million that it had put aside for the resolution. The agreement – resolving allegations that Standard Chartered had violated sanctions in Myanmar, Cuba, Iran and Syria – was drawn up between five different authorities in the US in coordination with the UK Financial Conduct Authority (FCA). The FCA received $134 million for anti-money laundering breaches as part of the resolution - the highest ever fine that it has imposed for anti-money laundering failings. Standard Chartered also separately handed over $18 million after it self-disclosed that it had processed $75 million in transactions to people on the US Treasury’s sanctions list.

Registration for the awards is now open. The awards ceremony will be held after GIR Live Sanctions, Export Control and National Security, also on 24 October.

If you worked on any of the nominated cases but were not included on the counsel list, please contact us with details on your involvement.